Funeral services for Dick Slegh, 90, of Hollandale, will be at 11 a.m. Thursday at the Hollandale Christian Reformed Church. The Rev. Michael Bentley will officiate. Interment will be in the Hollandale Cemetery. Visitation will be from 4 to 6 p.m. Wednesday at the Bayview/Freeborn Funeral Home. Online condolences are welcome at www.bayviewfuneral.com. 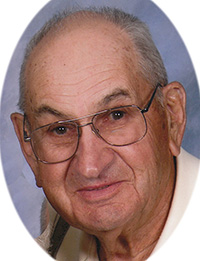 Dick Slegh was born on Oct. 3, 1922, in Oskaloosa, Iowa, the son of Peter and Cora (Fredricks) Slegh. He moved to Hollandale as a young child. On June 25, 1950, Dick was married to Adeline Behle. They were married 38 years and blessed with three children: Dean, Kent and Polly. Adeline died of cancer in 1989. Dick was remarried to Helen Wiersma on Jan. 3, 1990. They enjoyed traveling with their motor home, especially to Branson, Mo., northern Minnesota, Texas and Arizona. He was an avid gardener who enjoyed raising a large garden, and sharing the produce with neighbors, friends and family. Together they also loved to can and freeze the produce. Dick enjoyed cooking and grilling special meals for the two of them.

On any given morning you could find Dick sitting at the local café having a cup of coffee with the farmers. Dick worked as a tractor mechanic for John Deere at Veldman Equipment for 40 years. He was a career mechanic who was gifted and skilled with any tractor engine. There was no problem too big or too small for Dick’s expertise. He was innovative and resourceful in finding a temporary solution to keep the farmers running. After retirement, he enjoyed being a “consultant” to anyone who needed information on restoring two-cylinder John Deere tractors. Dick had a passion for restoring antique tractors to their original glory.

Dick’s strong belief in Christ was reflected in his morals and values. His faith in Christ did not go unnoticed by those who knew him. In his life Dick had served on church council, the Hollandale City Council, the fire department, was the Water and Sewer Superintendent for Hollandale, drove a snowplow for the township and an ambulance for the fire department. He also made sure the tractor was running for the Autumn in the Village Days at the Freeborn County Historical Museum.