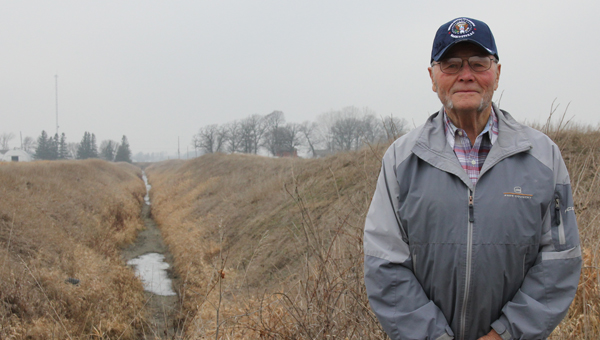 For 19 years one man has been managing Freeborn County’s ditch systems, a job that most county residents might not even know exists.

Phil Tennis, 84, has decided to retire from his post as county ditch inspector at the end of the year. Though he’s been the ditch inspector for so long, he knows someone else can handle the job.

“Our ditches are in really good shape,” Tennis said. “This county has always been progressive.”

The ditch systems he manages are not the grassy areas next to roads. He oversees natural and man-made waterways that affect farmland. Landowners are separated in to different ditch systems and pay for any work needed in these ditches.

“The county is just the and a lot of ditches,” Tennis said. “Water runs out of our county in every direction.”

Tennis said local contractors have been great to work with through the years. He’s also appreciated how supportive county commissioners are of his work.

County Administrator John Kluever said that maintaining and improving the ditch systems has been a collective effort with Tennis at the forefront through the years.

“We have ditch systems that many counties are probably envious of,” Kluever said. “We’re very proud of Phil and what he’s been able to accomplish for Freeborn County.”

The chairman of the county board was the one who first approached Tennis about the job back in 1993. He and his wife had just retired from farming, but he was up for the challenge.

They had farmed 900 acres and had a dairy operation with 60 cows. But Tennis was no stranger to public works. He served on the Albert Lea school board in the 1970s and was on numerous committees throughout the years regarding agriculture and education.

His wife, Edie, and he have been married for 63 years. She’s said she’s learned over the years to accept that meal times are not regular because of the work Tennis does. She’s looking forward to him leaving the post.

Tennis agreed that he may miss the work, but he’ll be glad to spend more time with his children and grandchildren. He has a simple remedy if he starts to miss county government, though.

“I can still go to meetings,” Tennis said with a laugh.