Funeral services for Donald R. Stoneking, 92, of Albert Lea, will be at 2:30 p.m. Saturday at Faith Baptist Church. The Rev. Dennis Seiler will officiate. Interment will be in Graceland Cemetery. Visitation will be one hour prior to the service at the church. Online condolences are welcome at www.bayviewfuneral.com. 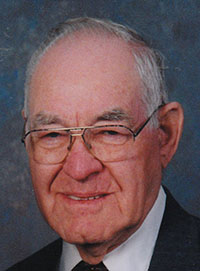 Donald R. Stoneking was born on a farm in Cherokee County, Iowa, the son of Ralph and Kathryn Stoneking. He was the oldest of seven children. He attended school and graduated from Quimby High School in 1936. He spent several years with a friend working at various jobs before coming to Minnesota where he met Norma Centers. They were married on Sept. 1, 1940. He and Norma farmed a number of years before moving to Delavan. There he worked for the Delavan School System and assorted other jobs. They moved to Easton, where they owned and operated a café until 1961. They then moved to Albert Lea. Donald owned and operated ServiceMaster cleaning service until his retirement. Donald and Norma both loved to travel. They made many trips around the 48 contiguous states, as well as Alaska, Hawaii and the Caribbean. Donald was a hard worker and thoroughly enjoyed life. He made many friends over the years. Donald was an avid reader. He also enjoyed bowling, playing card games and visiting with family and friends. He was a member of Faith Baptist Church as well as several service organizations. Most of all, Donald loved his family dearly. Blessed be his memory.

Donald was preceded in death by his parents, and siblings Ethel Foss, George Stoneking and Beth Vesgaard.