Eldon Coyle, much beloved father, grandfather and great-grandfather went to his heavenly home on Thursday, Dec. 20, 2012, at the age of 93. Funeral services will be at 10:30 a.m. Thursday at Good Shepherd Lutheran Church in Wells. Visitation will be from 4 to 8 p.m. Wednesday at Bruss-Heitner Funeral Home in Wells and will continue one hour prior to the service at the church. The Rev. Kathy Fullarton will officiate and interment will be in Rosehill Cemetery, Wells. Bruss-Heitner Funeral Home in Wells is in charge of arrangements. Please see www.brussheitner.com to leave online condolences. 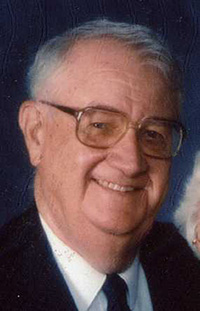 Eldon was born Sept. 8, 1919, in Fillmore County, the son of John and Clara (Kyseth) Coyle. Stricken with polio as a young boy, surgeons performed an experimental surgery to keep him walking reasonably well for the rest of his life. Despite a significantly weakened left leg and back, he never let his limitations prevent him from achieving his goals in life.

Eldon will be remembered for his legacy as an educator, whose teaching many former students claimed was second to none. He had a tremendous caring, encouraging, respectful and patient attitude toward his students, always finding time to offer further assistance and counsel at any time. He spent many hours off the clock preparing his classes. Mr. Coyle began his teaching career in Mabel, followed by a year in Preston before receiving his position as chemistry and physics instructor in Wells. He received his Bachelor of Science degree in science education with a minor in music from Winona State College. During his undergraduate studies he also participated in several vocal groups through the college. He earned a master’s degree from the University of Minnesota and continued to attend many summer institutes to keep up to date in his field. To celebrate his exceptional teaching career, he was honored as a finalist for Minnesota Teacher of the Year in 1967.

Eldon married Phyllis Beckmann, the Wells public school secretary at the time, on Oct. 19, 1946, at First Lutheran Church in Wells. Two children were born to this union, Dolores and Duane. Eldon was a very loving father, never wanting to leave his family behind while pursuing his continuing education in different regions of the country. Eldon and Phyllis never missed any of their granddaughters’ athletic or musical events, often traveling long distances and enduring inclement weather conditions. They also attended several of their step-grandsons’ football games in brutal weather conditions.