Eleanora passed away peacefully at her home with her family by her side on Dec. 20, 2012. 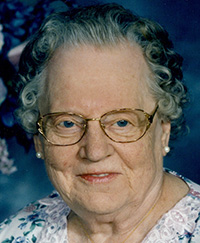 Eleanora Dorothy (Kuchera) Peters was born to Lester and Elva (Bertelson) Knutson on Aug. 22, 1920, on a farm near Glenville. She attended Albert Lea schools and married Charles Kuchera in 1940. Together they were blessed with three children: Harold Kuchera, Charlotte Nelson and Arthur Kuchera. They later divorced. On June 28, 1957, Eleanora was united in marriage to Clarence Peters in South Dakota.

Eleanora’s greatest joy was spending time with her family and friends. She enjoyed gardening, canning, cooking, playing cards and putting jigsaw puzzles together, as well as decorating for the holidays. Her Christmas raisin stuffing was a favorite with her family! She was an avid reader and loved camping with her son Art’s family at Beaver Trails. She was also excited to travel with them to Branson, Mo., and after her trip to Las Vegas she was absolutely thrilled with her first experience flying in a jet. The Nelson granddaughters have particularly fond memories of their sleepovers and then going home and finding a “suitcase surprise” that grandma had left for them. She had a zest for life that is hard to match. She found her trips to the casino to be an interesting and fun adventure, as she loved to people watch. Eleanora will be remembered by everyone she encountered for her great sense of humor and feisty nature. She believed in remaining positive and she passed along that mind-set to many of her family members and friends. Blessed be her memory.

Eleanora was preceded in death by her parents, husband, siblings, Norton and Floris and son-in-law, Dwaine Nelson.

Over the course of Eleanora’s life she developed some very special relationships with people, some of whom survive her as well: Virginia Kuchera, Maxine Jacobson and Sandy (Roger) Baker who “adopted” her as their mother.