Hundreds show up to feed kids 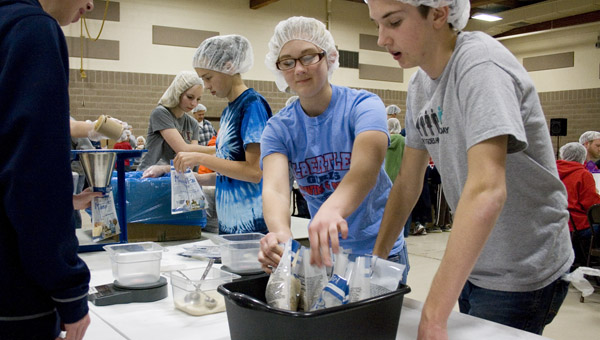 At least 500 area residents united Saturday afternoon at the Albert Lea Armory to pack meals for people in need of food across the globe.

As part of the Feed My Starving Children Mobile Pack event, volunteers were slated to pack 100,000 meals by the end of the day. 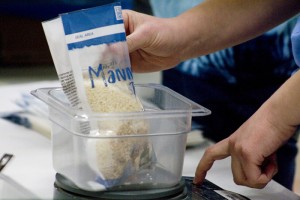 “It feels really good,” said 15-year-old Jacob Jensen, an Albert Lea High School student and organizer of the event. “It’s humbling to see all the support we’ve gotten for this.”

He said to raise the money, he and other students made presentations at area churches, went to businesses and even had a penny war at the high school. They also stood on the corner of Main Street and Broadway Avenue on Black Friday to collect donations.

On Saturday, the volunteers, clad with hair nets, divided into groups and set up assembly lines to pack the meals into small pouches.

Called MannaPacks, the pouches contained a mixture of rice, soy, dehydrated vegetables, chicken flavoring and vitamins and minerals. Each pouch can serve six people, according to organizers.

One person opened the pouch and placed it around a funnel, other people scooped the ingredients into the bag and then others weighed, sealed and packed the pouches into boxes. 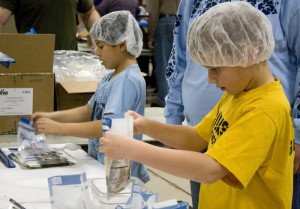 “It’s been a great experience, and it’s going to a good cause,” said Karli Kinsella, who drove down to Albert Lea from St. Cloud to earn volunteer hours for her dental assistant program.

Kinsella and a group of other students said they knew family or friends who had taken part in a meal-packing event themselves, and they wanted to try it out.

She said they looked up the event online and didn’t mind driving down to Albert Lea.

Others attended as families with even younger children being able to help in some way.

The meals are designed to improve health, growth and physical well-being of the people who eat them.

Feed My Starving Children, a Christian nonprofit organization, was founded in 1987.

According to the organization’s website, more than 600 million meals have been produced in the group’s history.