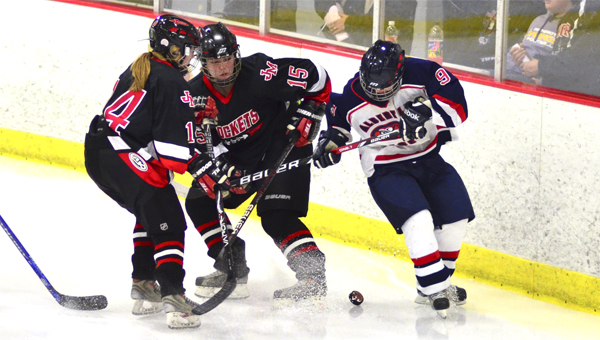 The Tigers girls’ hockey team lost its first home game of the year on Thursday to a very strong Rochester John Marshall team. The Tigers lost by a score of 3-1 to the Rockets and fell to 6-4 on the year.

The Tigers controlled the puck for much of the first period up until the Rockets scored two quick goals just 27 seconds apart late in the period. The Tigers were out shot by the Rockets 10-4. The period ended with the Rockets leading 2-0.

The Tigers came out in the second period with a little spark. Just 28 seconds into the period, Sarah Savelkoul put the puck past the Rockets’ goalie and just like that the Tigers were in the game. Assists went to Hannah Savelkoul and Sydney Overgaard.

Goalie Katie Schwarz played strong in goal for the Tigers, stopping a fury of shots in every period.

Schwarz let one more goal in with 2 minutes, 38 seconds left in the second period and stopped everything else the Rockets threw at her the rest of the game.

The score after two periods was 3-1 with the Rockets having the edge.

The third period was scoreless, even though the Tigers had the lone power play in the game, but could not capitalize on the opportunity.

“Obviously we are a young team with no seniors. We just need to keep working on getting better in our end of the ice and creating more scoring chances,” Willett said. “We continue to get better. A month ago this team would have handled us pretty easily and tonight we gave them a pretty good scrap.”

The Rockets had 22 skaters to the Tigers 11. With just 11 skaters, it’s hard to rest the girls’ legs during the game.

“It affects us quite a bit, simply because it makes it tough for us to match lines against a team that is rolling three lines against us. Late in periods and late in the game, we get tired legs. Against a very skilled and deep team like John Marshall, it makes it tough the last four minutes of each period. We just don’t have much left in the tank,” Willett said.

The Tigers will play Red Wing, who is undefeated, at home on Saturday. Red Wing is ranked No. 2 in the state with a record of 9-0.