The funeral service for Marcine H. Drescher, of Albert Lea, will be at 3 p.m. Monday at First Lutheran Church in Albert Lea. The Rev. John Holt will officiate. Interment will be in Hillcrest Cemetery. Visitation will be from 2 p.m. to 5 p.m. on Sunday at Bonnerup Funeral Service, Albert Lea, and one hour before the service at the church. 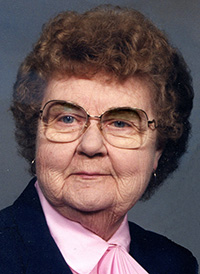 She was born on July 20, 1924, in Hartland, the daughter of Howard L. and Mildred M. (Thompson) Hanson. She graduated from Albert Lea High School with the class of 1942.

She had worked at American Gas, Western Gas Station and South Minnesota Oil in Albert Lea.

She was a member of First Lutheran Church in Albert Lea, where she was active in circle. She was also a member of the American Legion Auxiliary, and the Disabled American Veterans Auxiliary.

For several years before Norman died they enjoyed their winters in Arkansas. Marcine’s main focus was loving and caring for her family. She was a great listener, awesome baker and always made you feel welcome in her home.

Marcine was preceded in death by her parents Howard and Mildred Hanson, her husband Norman in 1999, brothers Jay and DuWayne Hanson and two great grandsons in infancy.

Marcine will be sadly missed by her loving family and friends.