More than a bar 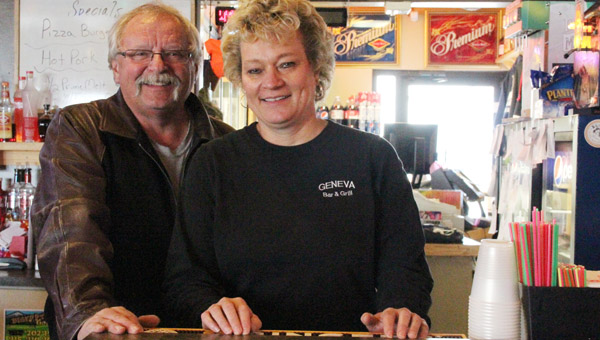 Jack and Barb Kuchenbecker own the Geneva Bar & Grill together. The business was recently named the Medium Business of the Year by the Albert Lea-Freeborn County Chamber of Commerce. -- Kelli Lageson/Albert Lea Tribune

GENEVA — The owners of a popular bar and grill in this town are trying to do more than just serve food and drinks. They’re aiming to have as many events as possible to get the community together.

The Geneva Bar & Grill is owned by Barb Kuchenbecker and her husband, Jack. Kuchenbecker said she and Jack like to think of themselves as event planners as well as business owners.

“A lot of people still think of it as a bar and not a bar and grill,” Kuchenbecker said. 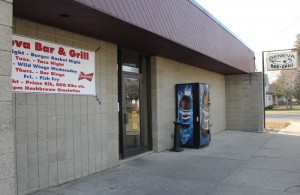 Growing their food and catering business has been one of their goals since they took over ownership of the bar 5 1/2 years ago.

“Food is probably 60 percent or more of our business,” Kuchenbecker said.

Kuchenbecker has a special attachment to the business because she worked there about 30 years ago when it was first built by the city of Geneva. After becoming owners a few years ago, Kuchenbecker said people asked for more food choices. And she delivered — the business now has different food specials almost every night and has a full menu for lunch and until 10 p.m. most nights. Mondays are burger night, Tuesdays are fiesta taco night, Wednesdays are wing night, Fridays are fish frys and Saturdays mean prime rib, barbecue ribs, chicken and shrimp. Then from 8 p.m. to midnight on Saturdays are the famous hashbrown omelets. Breakfast is served from 9 a.m. to noon on Saturdays, too. And there’s daily lunch specials.

“The demand was there,” Kuchenbecker said.

Now, Kuchenbecker couldn’t imagine having the bar without the food. She’s also made it a point to plan events and support the community. In addition to bingo nights and cribbage tournaments, the business hosts the annual wild game feed that supports the Geneva Cancer Auction, a two-weekend event in January.

“I’m a promoter,” Kuchenbecker said. “There’s something going on all the time.”

The wild game feed was just held on Saturday, and Kuchenbecker said the event keeps growing. In 2011, the game feed donated $17,000 to the cancer auction.

“It’s so amazing what they put together,” Kuchenbecker said.

The cancer auction will be in its 29th year, and starts Jan. 11. Proceeds go to the Albert Lea Eagles to the Eagles Cancer Telethon based out of Rochester. Though Kuchenbecker likes supporting longtime events, she’s not opposed to trying something new as well. Tonight there will be a girls’ night out with a wine tasting and various vendors at the bar. And later this month on Dec. 21, the bar and grill will host an end-of-the-world party.

“So we can party till there’s no tomorrow,” Kuchenbecker said with a smile.

Entertainment and drink specials are planned. And with special events, the business also hosts pool and dart leagues. Kuchenbecker said it’s been a fun business to run, even with its challenges. She’s enjoyed working in Geneva, too.

“They’ve been helpful and cooperative to a number of members in the community,” Kehr said.

Kuchenbecker said she joined the chamber almost immediately after she and her husband purchased the bar.

“It’s helped us a lot as far as advertising,” Kuchenbecker said. “It gets your name out because the chamber is involved in so many different things.”