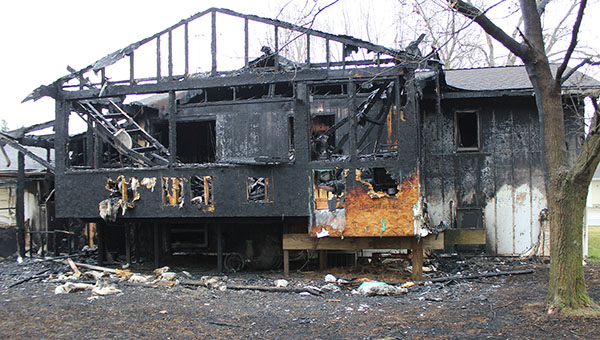 A fire burned most of 481 Hillcrest Road in Glenville, seen here from the back. The wood stove that reportedly caused the fire still rests in the charred remains of the back room. -- Tim Engstrom/Albert Lea Tribune

GLENVILLE — The family of Kevin Nelson was up later than usual on Sunday watching “The Mentalist” on CBS when daughter Madison Nelson stood up for a bathroom break. That’s when she spotted a fire two houses over. 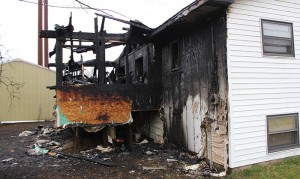 A wood stove reportedly was the cause a fire Sunday night at 481 Hillcrest Road in Glenville. The fire blackened the back of the house and most of the interior. -- Tim Engstrom/Albert Lea Tribune

She referred to the home of Shelly Saltou, 481 Hillcrest Road, and her boyfriend, Wayne Osmundson.

Another daughter, 17-year-old Meagan, called 911 while he and his wife, Misty, went outside to get neighbor Brad Adams, a Glenville volunteer firefighter. Nelson and Adams went into Saltou’s house. The lights were on and it was filling up with smoke, Nelson said. They stood at the landing yelling names. They didn’t know whether the couple was asleep or awake.

Saltou came running down a hallway, and Nelson got her outside, where Misty was waiting. Nelson and Adams yelled for Osmundson, then Adams warned Nelson that they had better get outside. They found Osmundson on the side of the home trying to get some way to douse the flames and soon firefighters arrived.

A wood stove was the cause of the blaze, according to a Freeborn County Sheriff’s Office report. Firefighters from Glenville and Hayward arrived. So did a fire investigation team from the Albert Lea Fire Department. The initial call came at 10:50 p.m.

The home’s damage is mostly visible in the back, but the interior is completely blackened, too, making the structure a total loss. An outbuilding and automobiles were saved. 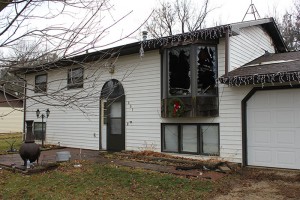 A front of 481 Hillcrest Road appears rather normal, except for broken glass. However, most of the interior was charred by fire Sunday. -- Tim Engstrom/Albert Lea Tribune

Initial reports said they were a family of four, and they are, but the grown children do not reside there — only Saltou and Osmundson do. The couple reportedly is staying with a daughter in Lake Mills and declined to comment for this story.

The neighbors might not have been able to help if the Nelsons had not been watching television at that time. Kevin Nelson said they normally do not stay up that late but programs had been delayed because NFL football coverage ran late on CBS earlier in the schedule. The Nelsons have two other children, a 10-year-old daughter and an 8-year-old son, who already were in bed and slept through the commotion.

Other neighbors helped out, too. Bill and Judy Stilley brought coats and and shoes. Mark and Stacia Schumaker across the street opened their home while firefighters battled the blaze.