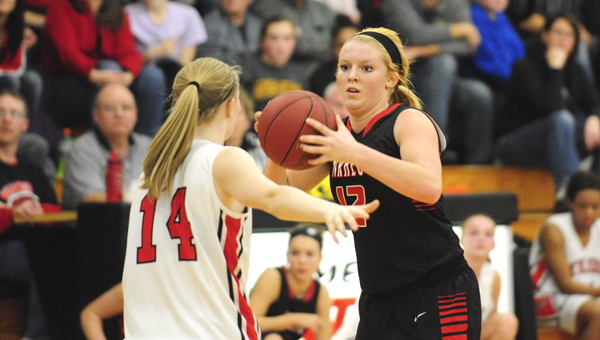 NEW RICHLAND — The New Richland-Hartland-Ellendale-Geneva girls’ basketball team defeated Bethlehem Academy Friday night 70-53.
The Panthers, who are ranked No. 2 in the state,  stole the ball from the No. 3 ranked Cardinals 22 times.
NRHEG’s strategy was planning hard defensively to slow down what head coach John Schultz called the Cardinals “potent offense.”
The Panthers had a total of 15 rebounds to go with their steals.
“It was a great defensive effort by all our players even though they didn’t reach the stat sheets,” Schultz said. “They did a good job of excecuting their roles tonight.”
Carlie Wagner led the team with 41 points, four rebounds, six assists and 10 steals.
“Carlie was tough to stop on the break and half court offense,” Schultz said.
Panthers Jade Schultz was another leader for the night.
She made three 3-pointers in addition to seven other points, six rebounds and three steals.
“Jade burried enough threes to make them adjust their defense,” Schultz said.
The Panthers next game is Tuesday at Southland.