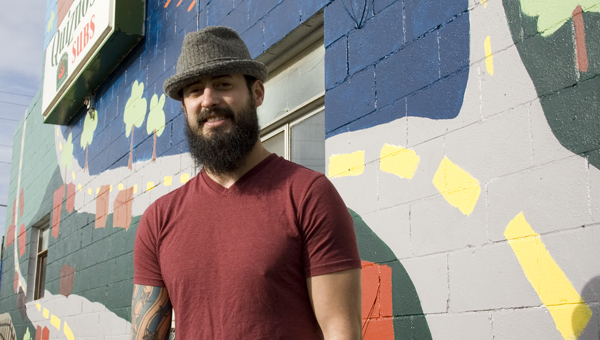 Local photographer and painter Ryan Heath stands in front of the new mural on the back of Quizno's Thursday afternoon. Heath designed the mural and with the help of other volunteers completed the project. — Sarah Stultz/Albert Lea Tribune

Albert Lea gets 2nd outdoor mural; more are on the way

A new mural on the back side of one Albert Lea business is brightening up the community thanks to a local artist and a group of volunteers.

On the back of the Quiznos building, 726 Marshall St., the mural depicts Fountain Lake and the road around it, along with Main Street and the railroad to the south. 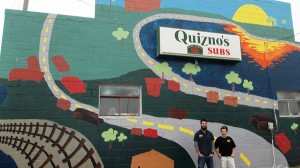 Artist Ryan Heath and Quiznos Owner Jenny Rayman stand in front of the mural on the Quiznos building that was designed by Heath and painted by various community volunteers, including youth from The Rock. — Submitted

It is visible to motorists driving west on Main Street through Albert Lea.

“It makes me feel there’s a greater sense of community when there’s work done like that,” said Ann Austin, director of the United Way of Freeborn County. “You get a sense of what the community is about.”

The mural is the brainchild of Albert Lea photographer and artist Ryan Heath, but it was created through a grant with paint manufacturer Valspar through the Southern Minnesota Initiative Foundation.

Heath said Austin approached him about the task; he brainstormed the design, and then they presented the sketch to apply for the grant.

The project followed the success of a larger mural in 2011 on the side of the Culligan Water building.

“We wanted to keep it local,” Heath said. “And we wanted it to be easy for anyone to come help out.”

After at least 10 gallons of paint and 100 hours of volunteer time by Heath, a few of his friends, Austin and some volunteers from Youth For Christ’s The Rock, the project was complete.

Heath said he and Austin had wanted to have the mural finished by June or July, but because of the heat it got delayed. It was completed in mid-November.

“They add a lot of color, and they definitely are a point of pride for the kids who work on them,” Austin said. “It gets them engaged in a different aspect of the community.

“It helps liven up the community and really encourage more people to take a look at how we can improve the area we live in. It really is up to each of us to step up and look at what can be my part.”

Heath, who is in the middle of completing another mural at The Image salon, said he was pleased with how the mural turned out and hopes to apply for another grant to create another one downtown.

“We’re pushing more art, more involvement from the community,” he said. “Hopefully we can keep that.”

Austin said she is looking for future walls to paint, and if anyone has any ideas of where might be a good location, they can contact the United Way office at 373-8670.