Playing at the top 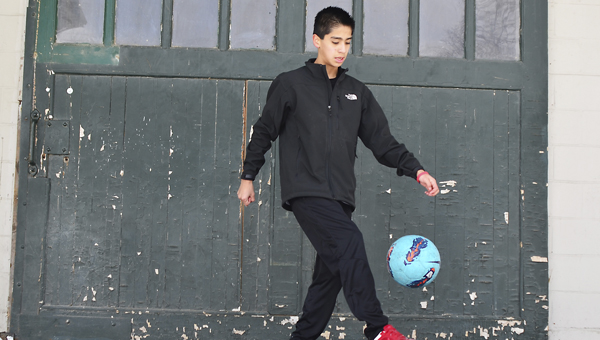 Tony Huerta-Apanco does tricks to show off his footwork. Huerta-Apanco has been added to the U.S. Youth Soccer Olympic Development Program. --Buck Monson/Albert Lea Tribune

Ramon Huerta-Apanco, Tony’s father, also mentioned that Huerta-Apanco is the only player in southern Minnesota that has been selected for the program. Most of the other players come from far away, either from the north, east or west. There just aren’t any from this area. 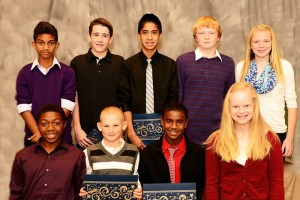 Albert Lea student Tony Huerta-Apanco, third from left in the back row, poses with other soccer players at an Olympic Development Program award ceremony. --Submitted

Huerta-Apanco’s parents said it was a big commitment to send him to the tryouts but knew he was very talented and that it is was well worth it. They will continue to support him until he is able to showcase his talents on a national level.

“It’s not cheap,” Huerta-Apanco said. “My parents save a lot of money for me to do this.”

Huerta-Apanco must try out for the ODP every year. He will be trying out for the 1999 group, which for is any player born in 1999. Players are evaluated by the state coach on technique, tactics, fitness, athletic ability and psychological component (attitude).

Huerta-Apanco made the program this year and went to the regional camp.

At the camps, the players receive high level competition and training. The players are evaluated for a possible national team camp, pool or team participation.

This year’s regional camp was held in Illinois. Huerta-Apanco said the top 18 players in his age group attended the camp.

He then attended a holdover camp for the region with 53 other players.

“I was lucky enough to do that,” Huerta-Apanco said. “They had kids from all over the region that were very talented, it was awesome.”

Although Huerta-Apanco made the 54 player program, he has not been contacted for competition yet. There is one more chance for him to be called to play in the spring. He is anxious in hopes of receiving that call.

If Huerta-Apanco does not get called, he will try out again in 2013. He has made a lot of new friends through the program and looks forward to playing with his friends on a higher level.

There are numerous benefits to Huerta-Apanco’s participation in the U.S. Youth Soccer ODP. He will develop as a player through competition with the best players in his age group, get quality instruction from a nationally licensed coach, play games against other ODP teams, gain exposure to regional and national coaches, as well as college coaches, and he will have the opportunity to represent his state, region and country in competition.

Huerta-Apanco has been a resident of Albert Lea all of his life and attends Southwest Middle school as a seventh grader. His favorite subject is math because he loves working with numbers.

He has played for the Albert Lea U-12 team the last couple years.

In 2011, the team won the state tournament as a C3 team. This year, they were a C2 team and made it to the semi-finals. In 2013, they will be playing as a C1 team and will see tougher competition.

Huerta-Apanco doesn’t know his scoring stats but is pretty sure he had one goal in every game and had a few games where he had more.

Huerta-Apanco has some lofty goals for himself.

“I want to try to make it to the national level,” Huerta-Apanco said. “I want to play for the United States and play around the world.”

Huerta-Apanco said he has been playing soccer for a long time.

“I got my first soccer ball maybe a week after I started walking,” Huerta-Apanco said. “I started kicking it around, and I liked it a lot. My dad helped me out to start playing more.”

Ramon also played soccer when he was younger and has helped out in coaching Huerta-Apanco’s team this year with head coach Todd Lange.

“He’s the world’s best player, right now, and he started out very young too,” Huerta-Apanco said.