Prairie Profile: He hits the roads 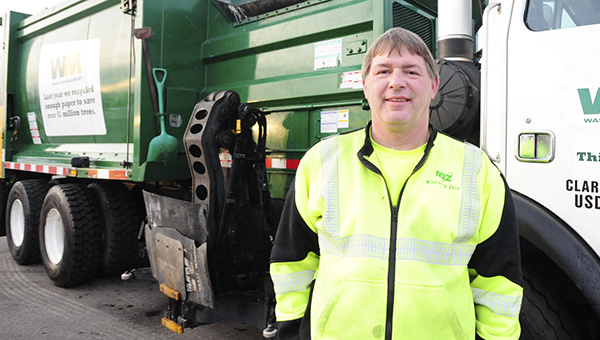 After working at Streater for 18 years before being laid off, Albert Lea resident Jim Hoiseth went back to school for his truck driving certification because driving jobs seemed to be the only ones the economy had to offer at the time.

With his license, he became a driver for Waste Management.

“I wanted something local,” Hoiseth said. “I didn’t want to go all over the road. I’m not that kind of a person.”

Hoiseth has been with the company for the last nine years.

“I was looking forward to it because it was different than being in a factory,” Hoiseth said. “And I’m still here. I must enjoy it.” 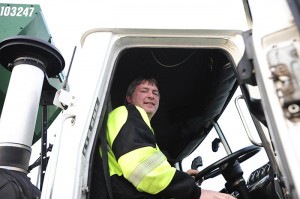 While he cruises down the city streets picking up garbage and listening to classic rock on KQPR, Hoiseth said he doesn’t really notice that he spends his work day alone.

He said he has several customers on his Albert Lea and Waseca routes who come out to visit or to wave to him.

“I like being out there, on the outside, but not really outside with the weather,” Hoiseth said.

When he first started with the company, he took care of picking up recycling. Even though it may not seem like much difference, Hoiseth said it was. Recycling can’t just be dumped into the truck like the trash because it has to be sorted out by papers and rigids. So instead of sitting in the driver’s seat and letting the truck do the lifting, it requires the driver to get out and do the lifting.

Since then, Hoiseth sticks to just trash.

And no, he hasn’t come across anything strange on his routes yet, but he said he’s heard plenty of stories of what other drivers find.

Hoiseth puts in about 42 hours a week and makes commercial and residential stops.

Besides doing the route, he and other drivers are required to do truck maintenance daily because of the heavy use. Usually it’s simple things like checking fluids, brakes and lights.

When he isn’t working and the weather is nice, Hoiseth trades in the garbage truck and the radio station for a black Harley-Davidson Night Train and fresh air.

Hoiseth has had a love for motorcycles since he was 18 years old.

“My friends had bikes, and I thought, ‘Oh, I want to try that,’” Hoiseth said. “So, I went and got my motorcycle license and bought a motorcycle. I’ve been riding ever since.”

Since he first started riding, Hoiseth has owned eight bikes. He said it’s time to switch when he sees something newer and bigger.

His first motorcycle was a Honda Nighthawk S. He said his Night Train is like driving a cadillac compared to it. Next on Hoiseth’s wish list is a Harley-Davidson Street Glide.

“It’s bigger. It’s got a radio, and it’s not so big that you can’t ride it in town,” Hoiseth said.

In the warmer months of the year, Hoiseth estimated he and his friends go riding three to four times a week.

We take little trips to Mankato, Austin and Mason City,” Hoiseth said. “It all depends on what’s going on that day.”

He said he hasn’t taken any long trips yet but would like to someday ride to Sturgis, S.D.

“You’ll see every kind of bike there is,” Hoiseth said. “I’ve heard so many stories about it that I want to see it for myself.”

Livelihood: Hoiseth is on a pool league, is a Vikings fan and spends a lot of time on his Harley-Davidson.