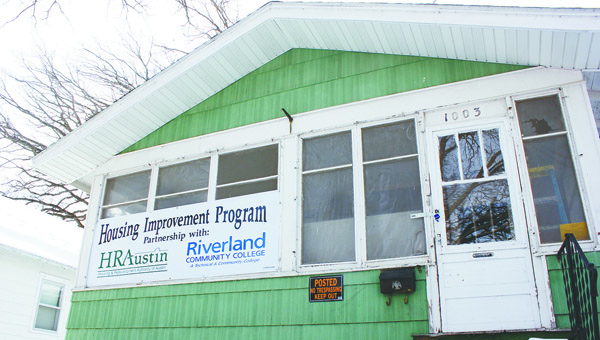 Riverland Community College carpentry students remodeled this home at 1008 Eighth Ave. NW in Austin. The Housing and Redevelopment Authority purchased the home from the county and has since resold it. — Matt Peterson/Albert Lea Tribune

“The first person that looked at it said, ‘I’ll take it,’” Mattson said.

HIP is a collaboration between the HRA, Riverland Community College’s carpentry program and Mower County, among other organizations, formed last year to improve Austin’s housing market. HIP officials hoped to do that by fixing up dilapidated homes and selling them to low-income families who qualify under the First Time Homebuyers Program.

Mattson and HRA Executive Director Jim Hurm bought the home from the Mower County Board of Commissioners in July 2011 for $1,550.50, while Riverland students worked on the home throughout the last school year, finishing major work in May. The home, now a three-bedroom two-bathroom place with a finished basement, sold for $74,500, Mattson said.

That’s less than what was spent working on it, however. Initial estimates for the work added up to about $80,000, and Mattson said program officials originally didn’t plan to finish the basement but needed to in order to raise the asking price. However, the home will be readded to the city’s tax rolls, which means the city will benefit from more property taxes.

The first Housing Improvement Program house isn’t the only project done this year, as Riverland students under HIP have repaired four other homes for area seniors seeking help with things like fixing a roof. While those homes were found through the Mower County Senior Center, Mattson and other program officials hope to do similar house repairs for more residents.

“We’d like to do a lot more,” Mattson said. “Sometimes people need help with the job.”

Mattson said people interested in having their home fixed can apply to the program through the HRA office by calling 507-433-1866.