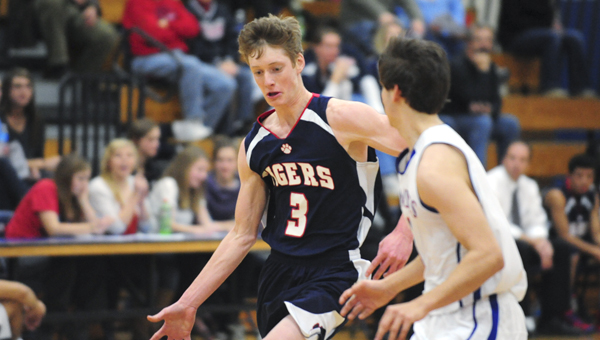 Cody Scherff lept up and dunked the basketball for the Tigers’ final basket Saturday night against Kasson-Mantorville with three seconds remaining.

“What a way to top it off,” Tigers head coach Lucas Kreuscher said. “It was a great exclamation point on the game.”

The win was a team effort.

“We had great defense, we moved the ball around and made free throws when we needed them in the second half,” Kreuscher said. “I can’t say enough good things about them.”

The Tigers trailed Kasson-Mantorville at halftime 29-28.

“We weren’t clicking very good in the first half,” Kreuscher said. “We kept our poise, though, and got it going in the second half.”

A basket within 20 seconds of the second half by Jorge Sena lit the Tigers up.

“He hit the opening bucket to make us go up and we had the lead from there on out,” Kreuscher said. “That was huge.”

Sena put up seven points on the night.

Tyler Vandenheuvel kept whooing the crowd by scoring 3-pointers. He made six of them toward a game total of 24 points.

Miles Erdman stepped up his game Saturday, too. Erdman had a double-double for the night after scoring 18 points and 15 rebounds.

“It was by far his best career game,” Kreuscher said. “Miles was unbelievable. I shouldn’t say unbelievable, though. Yesterday he had a terrific practice and it was great to see him carry it over.”

Going into the game Kreuscher wasn’t sure what to expect. He estimated Kasson-Mantorville graduated 14 seniors last year, including several top players.

“We didn’t know much about them, but once we identified them, I think we did a good job,” he said.

One of the biggest threats from the KoMets was Chad Aaker, a senior guard.

“Aaker is their best shooter and he got loose on us early in the game,” Kreuscher said. “We put Shaw on him and he shut him down.”