With one minute, 10 seconds remaining in Friday’s game against Rochester Mayo, Albert Lea pulled its goalie from the net and sent six skaters after a goal that would have tied the game. 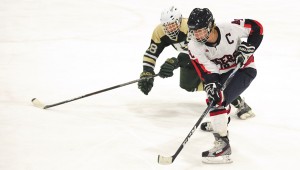 The Tigers got a couple shots off but were unsuccessful, and Mayo won the game 3-2.

It was the first time the Tigers have made the move this season.

“It’s the first opportunity we had to pull the goaltender where we were behind by one goal,” Tigers’ head coach Roy Nystrom said. “The other games we lost, there was no sense in pulling the goaltender because we had no chance anyway.”

Albert Lea started the game with a 2-0 lead in the first period, but Rochester Mayo tied it up with two powerplay goals with less than one minute remaining in the period.

The Spartans scored their third and final goal in the second period.

The game was scoreless in the third period, but Rochester Mayo took seven shots and Albert Lea took eight. 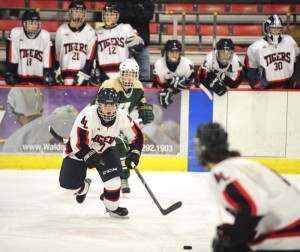 “We had chances in the third period to doggone knot that thing up and we couldn’t do it,” Nystrom said.

Overall, he called it a good hockey game.

“Both teams played hard and showed a lot courage and a lot of guts,” Nystrom said. “One of them had to lose and it happened to be us.”

Nystrom noted some of the plays the Tigers made could have been done differently, like taking closer shots, but praised them on their efforts.

“They played the game,” Nystrom said. “It’s very easy to criticzie when you’re watching. When you’re playing and you’re on the ice it’s a little different.”

The Tigers’ goals were scored by Lucas Peterson with assists from Matt Cheever and Kohl Kriewall and on a power play by Van Zelenak with an assist from Larry Olson.