Tigers slip in 2nd half 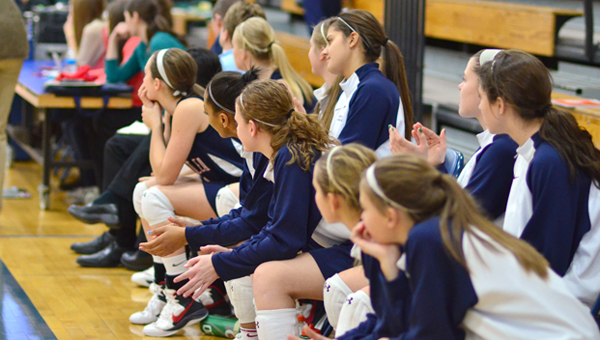 The bench tries to get the defense fired up with a little cheer against Rochester Mayo on Tuesday night. --Buck Monson/Albert Lea Tribune

The Albert Lea girls’ basketball team took another tough loss Tuesday night against Rochester Mayo. The Tigers took a lead into the half, but came up short in the end with a score of 54-39 in favor of Mayo.

“Things are starting to come together,” Tigers head coach Lindsey Hugstad-Vaa said. “We just need to stay focused the whole game and try to finish it out.”

The Tigers gave up an early 3-pointer to Mayo before the Tigers went on an 8-0 run to take the lead. The Tigers dominated the boards in the first half led by Dominique Villarreal and Megan Kortan.

“First half we played really well, we stuck to the game plan,” Hugstad-Vaa said. “They played great defense, boxed out well and we were rebounding well and taking smart shots.”

The Tigers gave up their 8-3 lead when Mayo’s Rachael Doll started to heat up. Doll had 29 points in the game for Mayo. The Tigers held on to a 20-19 lead to end the first half.

In the second half, the Spartans started with an 8-0 run and it wasn’t until five minutes into the half when the Tigers put up some points with a shot from Villarreal. Sydney Rehnelt soon followed that up with a big 3-pointer, the Tigers only one of the game, to get the Tigers to within one point of the Spartans.

“It got away from us a little bit because we didn’t stick with that strong defense that we were playing in the first half,” Hugstad-Vaa said.

Once again, led by Doll, the Spartans went on an 11-2 run to pull away from the struggling Tigers. With the score at 38-27, the Tigers found themselves in a big hole. With some solid play from Sarah Niebuhr and Villarreal down the stretch, the Tigers did get to within six points one more time before the Spartans ran away with it at the end beating the Tigers by a score of 54-39.

“I’m really happy with the effort and how hard they played. We just need to be smarter on executing things. Hopefully we will take the things that we did well and take that with us to the next game,” Hugstad-Vaa said.

The Tigers travel to Rochester John Marshall on Friday.