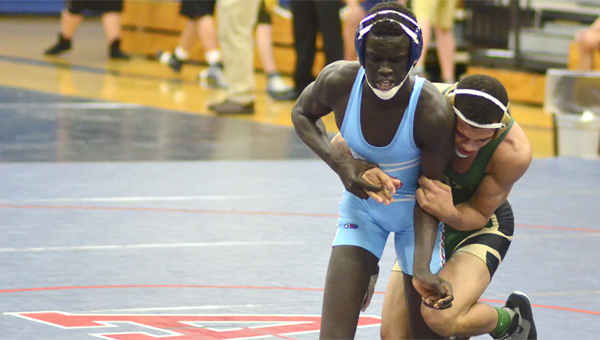 The Albert Lea wrestling team swept its first two home duals Friday after a blizzard on Thursday postponed the contests.

The Tigers took on a tough Rochester Mayo team first and won 39-31.

The Tigers then met up with Rochester Century and handed them a 73-3 blowout. The two wins put the Tigers at 7-0 on the year.

“Coming into this dual, I knew it was gonna be a tough one,” Tigers’ head coach Larry Goodnature said. “They were supposed to be tougher in the lower weights and they were really tough in the upper weights. We knew they had a good team.” 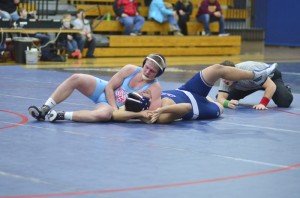 In the first match against Mayo, Garrett Aldrich started off with loss by major decision 14-5 at 106 pounds.

Beau Johnsrud pinned his opponent at 113 pounds and was followed by another pin by Garrett Wangsness at 120 pounds.

Mayo’s Miles Patton responded by pinning Trevor Westerlund at 126 pounds to get them back within two points of the Tigers.

“We knew he was good, but we figured we would win that one,” Goodnature said. “And we ended up getting pinned, so that was a big upset and a big turnaround for them.”

At 132 pounds, Dakota Wangsness pinned his Spartan opponent in just 47 seconds. Tigers’ freshman Mason Hammer stepped in for a forfeit at 138 pounds. With those two wins, the Tigers pulled out to a 24-13 lead on the Spartans.

Devin Nelson lost by a 3-1 decision at 145 pounds against the Spartan’s Jake Hanson. 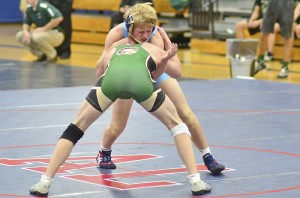 “We kept it close with Devin and this Jake Hanson kid. He’s one of their best wrestlers and we kept it close,” Goodnature said. “When you wrestle these duals, it’s all about bonus points, who can get the falls, who doesn’t get pinned and who gets a major. That’s the key.”

Lucas Hansen followed up at 152 pounds with a major decision (10-0) over Brady Nelson.

“Lucas had been beat by that kid last year in the dual 4-2 and he ended up majoring him this time,” Goodnature said. “That was a big turnaround for us.”

As the two teams kept battling back and forth, next up was Dedoch Chan, who was pinned by his opponent at 160 pounds. His brother, Bany Chan, was next with a win by a technical fall (17-1) in two minutes.

Tim Christianson struggled with his Spartan opponent and lost by a decision (10-3) at 182 pounds. Tristan Westerlund got the Tigers’ only win in the last four matches by pinning his opponent at 195 pounds while both Matt Nemec and Jacob Kunkel lost their matches at 220 and 285 pounds, respectively. Nemec was pinned and Kunkel lost by decision.

“We had some big matches up top there with Tristan getting a fall there,” Goodnature said. “And, Bany went up to 170 instead of 160 and that was a good move for us.”

The Tigers pulled out a 39-31 victory in the end to beat the Spartans.

“Here before Christmas we’re not down to our regular weights,” Goodnature said. “We’ll be a little better team when we’re cut down.”

Next up for the night was the second half of the double dual against a young Rochester Century team.

“Century is a rebuilding program, they had a lot of young kids in there, I think they had three eighth-graders,” Goodnature said.

The Tigers once again sent Aldrich to the mat first at 106 pounds. He would get the win by decision over his opponent. At 113 pounds, Johnsrud won by a major decision to give the Tigers a 7-0 lead.

The Tigers went on to get 11 straight pins, two of those coming via forfeit, to extend the lead to 73-0. Those getting pins were Garrett, Trevor, Dakota, Nelson, Samudio, Hansen, Bany, Tristan and Nemec. Nick Kromminga and Christianson both won by forfeits.

“We went out there and did our jobs and got our pins. Our goal as a team is to win the Big Nine championship and every time you wrestle a Big Nine team, you got to win it. You got to win them all to get the championship. We’re undefeated as a team right now, I think we’re 7-0,” Goodnature said. “We just got to keep that rolling.”

Jacob Kunkel finished it up at 285 pounds and just about pulled off a win, but came up a bit short in the end to lose by decision (2-1) to his opponent. Rochester Century avoided getting shut out by winning that last decision.

“Jacob was really close to getting that last win for us. He did everything right and the guy just kept rolling him through there and it was unfortunate for Jacob,” Goodnature said.

The final score ended up 73-3 with the Tigers dominating the young Century team.

The undefeated Tigers travel to the Rumble on the Red in Fargo, N.D., this weekend.