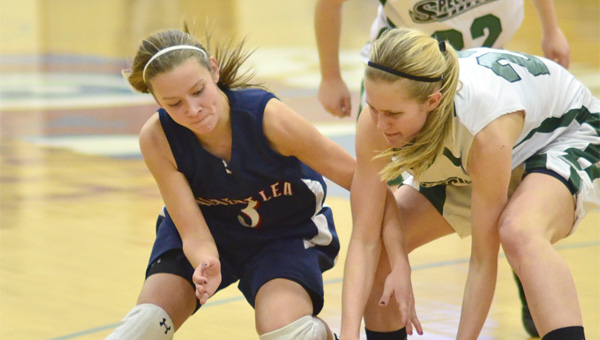 Katie Rasmussen and a player from Spectrum go for a loose ball Thursday during the Tiger Classic. --Buck Monson/Albert Lea Tribune

The Albert Lea girls’ basketball team got off to a great start in the 2012 Tiger Classic on Thursday against Spectrum. The four-team tournament was host to Austin, Red Lake and Spectrum. The tournament goes into today with the third-place game at 1 p.m. and the championship game at 3 p.m.

In their first game of the tournament the Tigers beat Spectrum 66-34 with solid play by everybody on the team.

Spectrum started the game with a 3-pointer and looked as if they came ready to play. The Tigers responded with six points of their own, scored by three different players. Spectrum kept the Tigers at bay until there were about 11 minutes left in the first half. The score at that point was just 19-14, the Tigers leading. 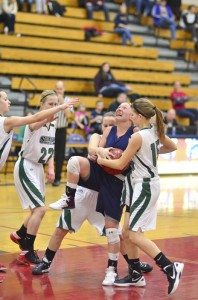 Bryn Woodside fights off four defenders at the basket Thursday in a home game against Spectrum. --Buck Monson/Albert Lea Tribune

From there, the Tigers went on a 47-9 run that spanned over both halves before pulling their starters and giving the bench players some time. In that run, the Tigers played strongly on both offense and defense. They had a 20-0 run before Spectrum broke it up with a 3-pointer before the half ended.

“We passed well and saw each other well too, which is good,” Tigers’ head coach Lindsey Hugstad-Vaa said. “The girls looked to attack, just did really well rebounding, getting in the passing lanes. The girls just played really aggressively.”

“Danielle normally plays a full game of junior varsity,” Hugstad-Vaa said. “She did really well for us and came out and was really aggressive.”

In the second half, the Tigers started by scoring the first 10 points of the half to take a 54-20 lead. Hugstad-Vaa started giving her bench players some much needed time on the court.

While the Tigers rotated bench players in, giving rest to some of the starters, they still went on a 12-0 run after Spectrum scored on a three-point play, making a free throw after making the basket and being fouled. The score was 66-23 with less than nine minutes left to play in the game.

At that point all of the starters were out of the game and the bench players took over. Spectrum was able to score 11 straight points to end the game, but the girls played hard and didn’t give up, fighting for the ball all the way to the buzzer.

“It was nice because we got to play a lot of girls, girls that don’t normally get in,” Hugstad-Vaa said. “So they got to be a little more comfortable.”

Because of their win, the Tigers will face Austin in the championship game today at 3 p.m.

“Tomorrow will be a really good game for them. We were down by 10 at the half and then came back to win it by about 15,” Hugstad-Vaa added about the last matchup between Austin and Albert Lea.