Kristin Behl and Jon Wadding of Hopkins were married at 4 p.m. Sept. 15, 2012, at the Calvary Lutheran Church in Golden Valley. The Rev. John Brecount performed the double-ring ceremony. 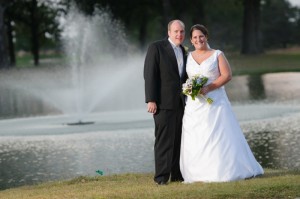 Ushers were Andy Yocom, of Rochester, Ryan Mathis, of Waterville, Iowa, and Richie Mathis, of Mankato, all friends of the groom.

Dan Oie played piano and organ, and Ben Hertle was the vocalist. Reader was Melanie Korish, cousin of the groom. Greeters were Chris and Michele Carlson, Kaitlyn and Holly Carlson, and Devyn Korish, all family of the groom, and Amanda Gravdahl, cousin of the bride.

The bride graduated from Armstrong High School in Plymouth in 2001. She is employed at Park Nicollet Clinic.

The groom graduated from Glenville-Emmons High School in 2000 and from Minnesota State University, Mankato, in 2004. He is employed at iQor.

A reception was held at 5 p.m. at the Medina Golf and Country Club in Medina. A honeymoon will be taken in January to the Dominican Republic.