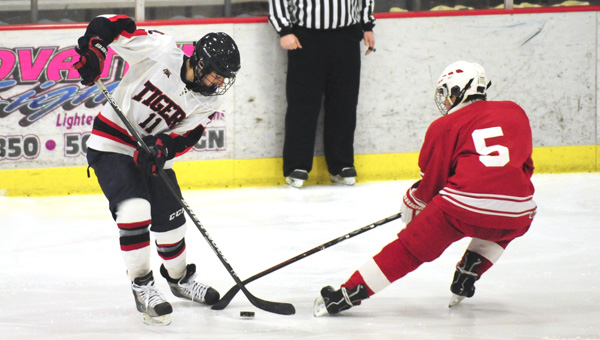 The Albert Lea boys’ hockey team jumped out to an early lead and played aggressively until the final buzzer in a 5-1 win over Austin.

The victory is the Tigers’ third in a row. Over that stretch, Albert Lea has outscored its opponents a combined 13-3. 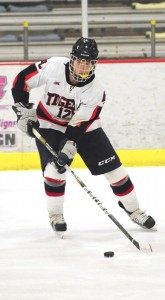 Joshua Martin, a senior defenseman from Albert Lea pushes the puck up the ice against Austin. --Micah Bader/Albert Lea Tribune

The Tigers got off to a great start. Junior wing Andrew Thompson scored a goal only six minutes into the match on a pass from fellow junior wing Lucas Peterson.

About five minutes later, Peterson scored a goal of his own on a pass from senior defenseman Josh Martin.

Austin managed to light up its side of the scoreboard with only 45 seconds left in the first period to cut its deficit to one goal.

In the second period, Albert Lea struck again. This time it was an unassisted short-handed goal by sophomore wing Alex Claassen.

With only five seconds left in the final period, the Tigers scored another goal, just as Austin had at the end of the first period. Senior wing Aspen Heilman earned the goal, while Thompson and Van Zelenak were credited with the assist.

Just 10 days ago, the Tigers were in a six-game slump, but Albert Lea has come alive on the offensive and defensive sides of the ice.

Even though the Tigers doubled the Packers’ shots on goal, Nystrom said he doesn’t put much stock in that statistic.

Albert Lea’s record improves to 7-8 on the season.

Next, the Tigers host Rochester John Marshall on Thursday.

“It’s going to be a big game for us, but they’re all big games for us right now,” Nystrom said. “If we play like we did tonight, we’ll have a chance.