A little house for little kids 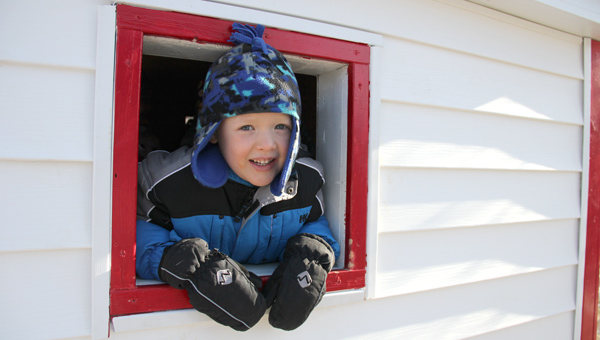 Carsen Gradner, 4, pokes his head out of the window of a new playhouse at The Children's Center in Albert Lea. --Kelli Lageson/Albert Lea Tribune

An anonymous donor has made the outdoor play area at The Children’s Center in Albert Lea just a little bit brighter.

A new playhouse was installed in November after the Freeborn-Mower Habitat for Humanity held a raffle. An unknown person had bought the winning ticket and simply written on the stub that the playhouse should be donated to the preschool. 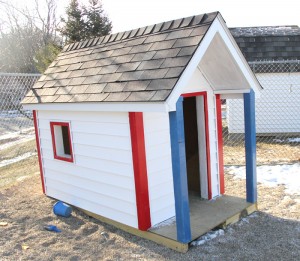 This playhouse was given to The Children's Center. The Freeborn-Mower Habitat for Humanity held a raffle fundraiser, with the playhouse as a prize. Someone wrote on their raffle ticket that if the ticket was drawn the playhouse should go to the preschool.

“It’s perfect for our age of kids,” said Kim Nelson, executive director of The Children’s Center.

“It’s really cool someone thought it was a good cause,” Nelson said.

The raffle raised more than $800, and tickets sold for $1 each. The tickets indicated that the playhouse prize was worth $2,500. Maryls Broberg, a volunteer and past board member with the Habitat for Humanity, said the playhouse raffle is a yearly event.

“Some people use it as a shed or decorate it in a garden,” Broberg said. “We’re so glad it went where it did.”

This is the first year there were two separate playhouses to be won. A separate raffle was held for both Albert Lea and Austin, since Habitat for Humanity works for both counties.

Nelson said that as many as 50 to 60 kids per day can take advantage of playing in the structure. The small playhouse is complete with a doorway, and two windows with trim. There is also a small front porch, and the roof is complete with shingles. It is painted white with red and blue accents.

Their outdoor play area has a jungle gym structure and other small toys. Nelson said the children have enjoyed the playhouse on the nicer days this winter. 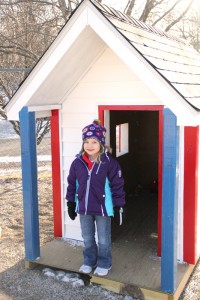 Kaylee Henderson, 5, poses for a photo by the new playhouse at The Children's Center on James Avenue in Albert Lea.

“It’s something different,” Nelson said. “It provides value and we didn’t have to pay for it.”

Nelson said she wanted to thank the anonymous donor and also said seeing that action helps her remember that Albert Lea is a great community.

“We as a community need to be reminded we’re pretty lucky,” Nelson said. “This is just another example of this community that thinks of others.”