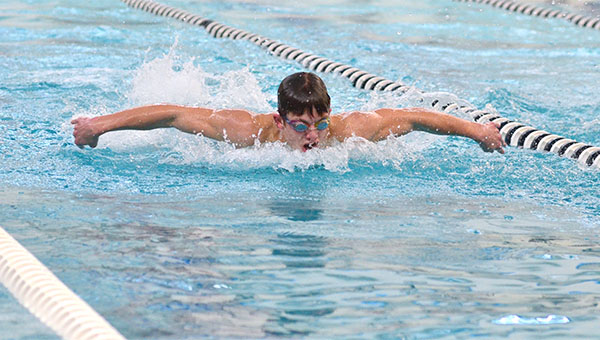 The Albert Lea boys’ swim team was defeated by Mankato West on Thursday night by a final score of 95-74. 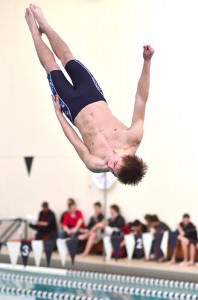 Kyle Zogg performs a dive during the diving portion of the meet on Thursday night against Mankato West. -- Buck Monson/Albert Lea Tribune

“They lost a lot last year. They have a couple really awesome swimmers, but they’re kind of rebuilding as well,” Albert Lea coach Jon Schmitz said of their opponent, Mankato West.

The Tigers’ first win didn’t come until the eighth event when Daniel Gould took home the win in the 500-yard freestyle.

“Daniel Gould is a good racer. He took that 500 out and won it,” said Schmitz.

Larry Holcomb came close to pulling off a big win in the 50-yard freestyle but lost it by 0.01 seconds to Tanner Sonnek of Mankato West.

“Larry Holcomb did a nice job tonight too,” Schmitz said. “We changed his stroke a little bit, now it’s a more complete stroke. He almost won the 50-yard freestyle, he got his best time.”

According to coach Schmitz, Preston Smith didn’t put up his best times, but swam well.

“Preston Smith missed out on going to state last year, this year he’s on track for going to state,” Schmitz said. “We haven’t had a guy go to state for a long time on the boys’ team.”

Schmitz talked about his best swimmer that he can’t use on the varsity team. 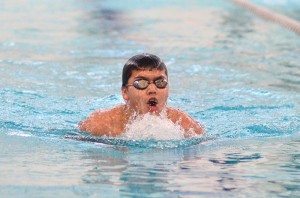 “Derek Wagner is definitely our best swimmer on the team. He can only swim JV because he’s a transfer student. He’s home schooled, he transferred in from the New Richland area. Since he lives outside the district, he can’t swim on varsity,” Schmitz said. “He’ll make a difference next year.”

Schmitz also said they are rebuilding this year and plan to improve next year.

“Our middle guys are stepping up. We have some kids that just came out, they’re basically rookies, they’re really doing a good job and improving. We have this team on the up and up,” Schmitz said.

Schmitz added that it didn’t help that three students were out with illness Thursday.

The Tigers’ next meet will be in Faribault on Jan. 8. 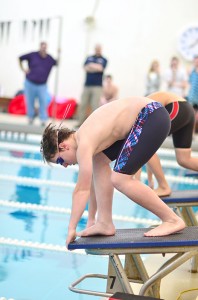