Awards are not possible without the readers

In the wake of the Albert Lea Tribune staff winning 10 awards last week at the Minnesota Newspaper Association convention in Bloomington, I have a few things to share with readers: 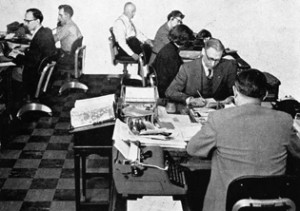 The booklet states: “Each member of the editorial staff is a specialist — some report city news, others farm and area news, some edit society and women’s pages, others edit Associated Press wire news. Each day, about 40 columns of type must be set.” --Albert Lea Tribune

• Congratulations to the excellent staff here. Readers often think all the honors to go just the news staff, but I want people to know that there are graphic designers with our composing department who also won awards. They often collaborate with the advertising sales team, whose names often go unheralded at the awards ceremonies, but they are instrumental just the same. And we cannot forget no one would see the stories, photos, videos or advertisements if not for the web developers, pressmen, mailroom workers and newspaper carriers who make sure our work gets to you — the reader.

On top of that, none of what we do would be possible if it weren’t for you. If you didn’t read us, we would be out of jobs, huh? So when we win awards, it’s thanks to you. We want you to know how much we appreciate you reading us each and every day.

• There is an interesting aspect of Albert Lea I have learned since I moved here seven years ago: Everyone in town, it seems, has worked for the Tribune at one time or another. 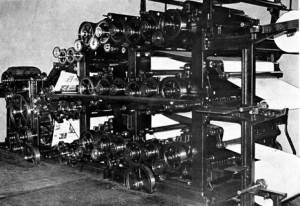 The booklet states: “The 24-page Scott press prints about 15,000 copies of the Tribune per hour at full speed. Issues such as the Sunday paper having more than 24 pages require extra press runs and insertion of sections by hand.”

The work we do today at the Tribune is possible because of the staff members who came before us and kept the tradition going. Thanks to all Tribune employees past and present.

•  The greater Engstrom clan is large and requires one of those nepotism charts they have in human resources departments to figure out how we are all related. One of my relatives from Fairmont — my mother’s cousin — found a booklet at a garage sale called “The Story of The Tribune.”

Considering the news of the awards from last week, I thought it only fitting to share this, considering the close ties this paper has to its past and this community’s history.

It says “Albert Lea, Minnesota” on the yellow cover and has a black and white photo of the former Albert Lea Publishing Co. building at College Street and Broadway, across from the Freeborn County Courthouse. 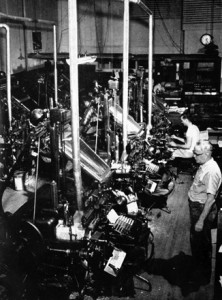 The booklet states: “Typesetting machines produce 9 lines of type a minute, from perforated tape. Such machines cost from $8,000 to $16,000 each.

The booklet doesn’t give a publishing date, but covers of the Tribune shown on the back are dated 1956. The publisher was Paul Belknap. He writes on the first page: “As a regular reader of the Tribune, you are familiar with its typographical appearance, its many features, comic strips and city and area news coverage. But few of you are familiar with the complicated and expensive machinery and intricate processes necessary for the publication of a good newspaper.”

The booklet then provides a “pictorial trip” through the plant. It shows the editorial staff reporting, writing, editing and headlining stories. There are engraving machines for photos and graphics such as the weather page. There are typesetting machines. “Each line of type, from small ‘legal’ size to two-inch letters, is cast automatically from melted metal.” Linotype machines and what was called a Ludlow machine created ads.

All of the words and images then are made into a single metal mat, which is then cast into an 80-pound metal plate that goes on a press.

The Tribune had a 24-page Scott press, and it could print about 15,000 copies of the Tribune per hour at full speed. A folding machine was the final step before the mailroom workers assembled the sections and the carriers delivered the papers to doorsteps.

The booklet shared how the business office handled the bills, advertising staff sold ads and circulation department managed subscriptions and the carriers.