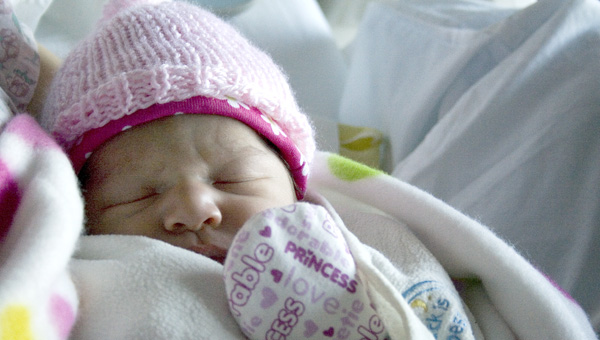 The daughter of Joselin Espinoza and Jonathan Viera of Albert Lea, Jaycelyn joins a brother, Jonathan, who is 2. 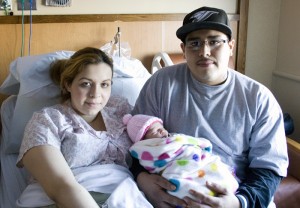 Proud parents Joselin Espinoza and Jonathan Viera pose for a photo Friday with their new baby, Jaycelyn Gissell Viera, in The Baby Place at the Albert Lea hospital. Jaycelyn is Albert Lea’s Baby New Year for 2013.

Espinoza said she initially thought she would deliver the baby on Thursday. She had gone into the doctor and was dilated to five centimeters but was sent home to wait for further progress.

She said she began having contractions at 10 p.m. that night, arrived at the hospital a second time at 11:40 p.m. and then four hours later, little Jaycelyn was born.

The labor was much shorter than with the couple’s first child, Jonathan, who Espinoza estimated she was in labor with for more than 24 hours.

Jaycelyn’s due date was Jan. 6.

Espinoza said she and Viera, who both work at Albert Lea Select Foods, were surprised to find out their daughter was the New Year’s baby.

Though Jaycelyn had been sleeping most of the day since she was born, Espinoza said she can already tell that Jaycelyn looks a lot like Viera, with the same nose and lips.

The rest of her family, including their son, was planning to come in and see the baby Friday night. 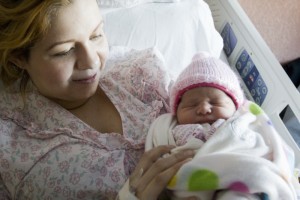 The family, who moved to Albert Lea from Los Angeles a year ago, received a bouquet of flowers with a balloon and a gift bag of items for the new baby from The Baby Place nurses.

Four hundred babies were born in The Baby Place in 2012.