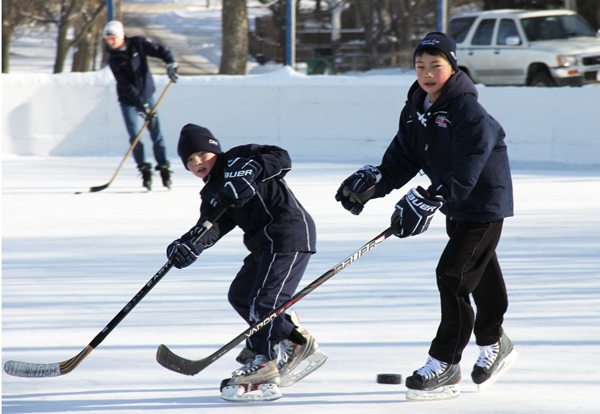 Two boys watch the puck fly after a hard hit. There were over 20 kids who were anxiously awaiting the Lakeview Park warming house to open Monday afternoon. — Colleen Thompson/Albert Lea Tribune

Snow piles up in the yard. Ice lines the driveway. The thermometer drops into the single and negative digits. The weather may be cold outside, but kids can make the best of it this winter at warming houses. 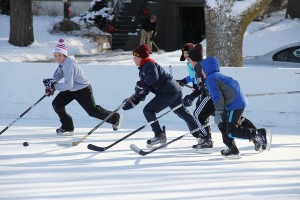 Five boys chase after the puck in an intense hockey game Monday at Lakeview Park. Boys of all ages had a full-out game going within five minutes of the warming house opening up. — Colleen Thompson/Albert Lea Tribune

The Albert Lea Parks and Recreation Department has opened up the warming houses at Hayek Park, Hawthorne Park, Academy Park and Lakeview Park for kids to have something to do during the afternoons and the long days during the holiday break.

“A lot of parents drop their kids off here in the afternoon and come pick them up after work,” said Karington Widmer, a Park and Rec housewarmer.

As a housewarmer, Widmer’s job is to make sure the warming house is clean and that the ice outside is suitable to skate on.

“I’m here to look after the kids and make sure they don’t get hurt,” Widmer said.

The warming houses and the play areas around them are popular hang-out spots for neighborhood kids. Because they’re open every single day, kids take advantage of the wide range of hours that the facilities are available. Many of the older children skate and play hockey in the rink, while the ones 10 and under usually practice skating in the non-enclosed skating area or play ping pong and Foosball inside. Kids can also bring snacks, play board games, make crafts or simply socialize with their friends. There’s usually 30 to 40 kids that come throughout the day.

“We have a lot of kids that come pretty regularly,” Widmer said. “They basically just come and do their own thing.”

The warming houses are open from 4 to 9 p.m. during the school week and 1 to 8 p.m. on the weekends.