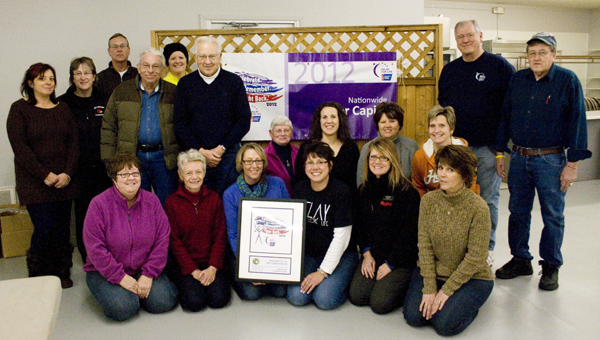 The Freeborn County Relay for Life Committee poses for a photo Monday with an award for being ranked fourth in the nation in 2012 for the amount of money raised per capita. --Sarah Stultz/Albert Lea Tribune

Fundraiser does well per capita

Freeborn County ranked fourth in the nation in 2012 for the amount of money raised per capita for the Relay for Life fundraiser, according to local officials.

“This is quite the accomplishment for Freeborn County,” said Co-Chairwoman Vicki Manges during a local Relay for Life committee meeting Monday night.

The ranking comes from dividing the amount of money earned by the number of people who live here.

The Relay for Life is the American Cancer Society’s signature event of the year and aims to draw survivors and the community together to raise awareness about cancer and support for research. Money raised goes to support cancer research, clinical trials, a call center for cancer patients, a visitation program for breast cancer patients, free lodging for patients undergoing treatment at Mayo Clinic in Rochester, among others.

Locally, the event is held at the Freeborn County Fairgrounds and incorporates people of all ages who come together for 12 hours for the same cause. Participants take turns walking around a track surrounded by luminarias dedicated to people who have fought cancer.

There were more than 5,000 Relay for Life events across the country in 2011, said Rick Jeddeloh, with community relations for the Midwest division of the American Cancer Society.

Of the money raised, an average of 80 percent stays local, Jeddeloh said.

Freeborn County Relay for Life in 2012:

• 7 people were provided transportation to and from their treatments, which totaled 106 rides.