St. Theodore Catholic School has a new principal who has been active in education and coaching for almost 30 years 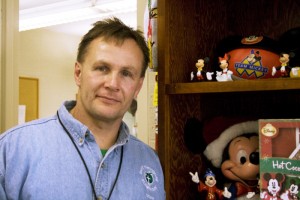 St. Theodore Catholic School's new principal, Shawn Kennedy, stands in front of his Mickey Mouse display case in his office. "I love Mickey and Minnie Mouse," he said. "I even wore a Mickey Mouse vest at my wedding!" --Colleen Thompson/Albert Lea Tribune

Although Kennedy has only been with the school since the beginning of the school year, he said the transition hasn’t been hard for him and that he’s been welcomed with open arms. He has nothing but praise for his fellow staff.

“They are just phenomenal,” Kennedy said. “They’ve been awesome to work with and have made my job so much easier.”

For those seven years without a principal, Deacon Mike Ellis had a lot on his plate, handling many of the duties of both deacon in St. Theodore’s Catholic Church and principal at the school.

Kennedy hopes to help move the school forward by increasing enrollment in the upcoming years. Enrollment went down slightly when Southwest Middle School switched in fall 2011 from a school with seventh and eighth grades to one with sixth and seventh grades.

St. Theodore currently has 69 students in kindergarten through sixth grade.

Kennedy’s wishes to move forward have already started coming true. A Smart Board, projector and six iPads were donated to the school by two families this year.

Kennedy also would like to update policies, add a preschool program, create better publicity for the school and make sure they have efficient lockdown procedures after school violence was in the news in December.

“With everything that happened in Connecticut, we especially want to make sure we have a safe school,” Kennedy said.

Working and relating with kids is nothing new for Kennedy. He became a coach when he was 19 years old. He currently has 28 years of experience under his belt and had been a football coach at Southland High School in Adams for the past seven years.

“My first coaching position really helped me grow up,” Kennedy said. “It’s also what made me fall in love with kids.”

He graduated with his undergraduate degree from Huron University and received his master’s degree in education from the University of South Dakota. In 1998, after he married his wife, Denise, he began working in the sales department at Daktronics in Brookings, S.D.

“It was hard to find a teaching job so I just worked there for the time being,” Kennedy said. “But I always believed my true passion was working with kids.”

Many of his 19 years of teaching took place in South Dakota. He taught all over the state, including two years as a fourth-grade teacher at West Central Hartford Elementary School. He also coached the football and gymnastics teams for West Central. He moved to Adams and held a job for nine years as principal at Sacred Heart Catholic School, a kindergarten-through eighth-grade school, and also taught social studies to fifth through eighth grades. When a position at Hormel Foods in Austin with better pay opened up, Kennedy took it, even though he said it didn’t feel quite right.

“I wanted to be the family man and provide as best as I could for my wife and kids,” Kennedy said. “My gut told me not to, but I didn’t listen. Always listen to your gut!”

He worked at Hormel for eight months but knew that it wasn’t his calling. He began the application process so he could get back into the education field, his true passion. Once he was hired, he began working at St. Theodore on Aug. 1.

“No amount of money can replace seeing the smile on a kid’s face,” Kennedy said.

Kennedy’s wife, Denise, also shares his passion for teaching. She teaches special education in Grand Meadow and has taught in South Dakota, as well, including West Central Hartford Elementary School. Together they have two children, seventh-grader McKendry and third-grader Brendan.

“My advice to my kids is to pursue what they love and not be afraid to fail,” Kennedy said. “I love to see kids succeed, especially when they work hard.”

With all the moving around and different jobs he’s worked at, Kennedy is happy where he’s at. He says taking this position has made him better, and he hopes to do the same for the school.

“The bottom line is that this is a wonderful school with great kids and great teachers; it’s like a big extended family,” Kennedy said. “I’m a better person with a stronger faith from working here.”