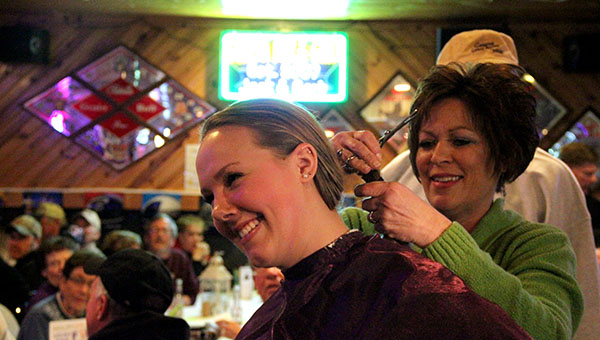 Brenda Burshem cuts the hair of 21-year-old Kate Quam for a Locks of Love donation. Quam donated her hair in honor of her parents who both had cancer. --Brandi Hagen/Albert Lea Tribune

GENEVA — Nearly $1,500 was raised by cutting off 20 inches of hair during the 29th annual Geneva Cancer Auction that took place this and last weekend. 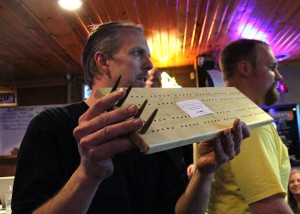 A handmade cribbage board is auctioned off Friday at the Geneva Bar and Grill. There was a wide variety of auction items that included baked goods and handcrafted pieces. -- Brandi Hagen/Albert Lea Tribune

Two participants received haircuts from Brenda Burshem, a beautician from Ellendale. She took off 10 inches of their hair to donate to Locks of Love, a nonprofit organization that provides hairpieces to children suffering from long-term medical hair loss.

The first donation was made Jan. 12 by 53-year old Brien Fitterer of Ellendale. He is Burshem’s brother.

“My dad and grandmother died of cancer and a lot of close friends,” Fitterer said. “It was a little thing I could do to contribute and cross something off my bucket list.”

Before his cut, Fitterer had grown his hair out 11 inches. It was the longest hair he’s ever had. Now, Fitterer’s hair is cut short to his head, and he said he doesn’t miss the long locks at all. 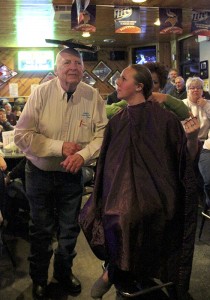 While Fitterer received his haircut, 80-year-old Dwayne “Whitey” Hagen, a longtime organizer of the event, made his way around Geneva Bar & Liquor collecting donations with a serving tray balanced on top of his bald head.

The money Hagen collected while Fitterer got his haircut was tallied at $1,000.

“I was shocked, Fitterer said. “I didn’t think we’d get that much.”

Hagen said people are very generous at the event.

“This is our 29th year so any reason they can find to donate, they seem like they will,” Hagen said.

Friday night, 21-year-old Kate Quam of Clarks Grove took her seat on a barstool in the middle of the crowd while Burshem cut her hair.

The cutting-off part was an easy choice for Quam, because her parents both had cancer, but doing it on a barstool in front of a full house was nerve-wracking. She’d never had such a large audience for a haircut before.

After making the donation, Quam ran her fingers through her much shorter hair and smiled. She said she enjoyed making her contribution and has plans to do it again.

“Mine will always grow back,” she said. “Some people don’t get that chance.”

With Hagen making two rounds around the bar with a tray positioned on his head, Quam’s donation raised $463 from the crowd.

Hagen said someone from Albert Lea company Crossroads Trailer wanted to see his balancing-tray act, a longtime tradition, the first night of the event on Jan. 11.

Hagen was told for every $100 that was placed on the tray, Crossroads Trailer would match it. 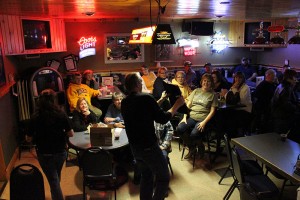 An auction item is held up to one side of the room Friday during the Geneva Cancer Auction. It was the third day of this year's event. -- Brandi Hagen/Albert Lea Tribune

Hagen collected $445 and Crossroads matched it plus a little for a grand total of $1,000 raised.

“It’s something that happens a few times every year for no reason,” Hagen said. “It’s a way of entertaining and a way to raise money. They think it’s amazing I can balance that tray on my head and move around.”

The money raised from the four-day event — Jan. 11, 12, 18 and 19 — will be counted today in Rochester at the Eagles Cancer Telethon. The last two years have brought in around $80,000 each time, but Hagen wouldn’t say what this year’s goal is.

“You can’t really set a goal for other people,” Hagen said. “Our goal every year for the people that are on the board of directors and working with us is to do the best we can. Whatever we get, we get. Sure, everybody likes to make big numbers, but we’re not the ones who donate the money.”

Hagen, who started the event after his brother died of cancer at 47, said the event grew to four days because there were so many auction items donated and Geneva Bar & Liquor just wasn’t big enough for one weekend worth of people. He added he’s started to see a lot more of the younger generation in the crowd than he used to.

“It’s a rewarding thing to be in, and it’s just something you look forward to every year,” Hagen said. “Evidently other people do, too.”

Some of the items auctioned off were solicited from businesses and people beforehand, but some items come to the event with the bidders.

Hagen said there are always lots of home-baked goods and handcrafted items in addition to monetary donations made in honor of loved ones and the raffles. A couple of the larger ticket items were a 51-inch TV and a trip to Las Vegas, but Hagen said for the most part it’s little things that just add up to the large donation to cancer research.

Items were auctioned off for about 12 hours the first weekend of the event and many more were added Friday and Saturday.

“People were very generous and there was nothing except a good feeling when they went home that they donated to cancer research,” Hagen said.

According to Hagen, 92 percent of the donations goes to cancer research. The money will be donated to the Mayo Clinic Foundation for Cancer Research, the University of Minnesota and the Hormel Institute as usual.