HOLLANDALE — A high-risk predatory offender is slated to move to rural Hollandale at the beginning of February, according to a news release today from the Freeborn County Sheriff’s Office.

Robert Carl Goodew, 21, a Level 3 offender, has been cleared by the Minnesota Department of Corrections to live at 28584 800th Ave., near the southern tip of Geneva Lake and three miles west of Hollandale. He is expected to be released from prison Feb. 2. 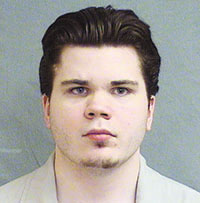 An informational community meeting has been scheduled for 6 p.m. Thursday at the Geneva Community Center, 405 1st Ave. SE, Geneva.

A notification fact sheet released by the Sheriff’s Office states Goodew engaged in sexual conduct and contact with a 12-year-old boy.

He was charged with second-degree criminal sexual conduct in Freeborn County in 2009 for showing explicit videos to the boy and physically forcing him into sexual contact.

He was eventually convicted of third-degree assault. He was placed on five years supervised probation and ordered to register as a predatory offender; however, he failed to register — a felony — and was sentenced to prison time.

When he was released from prison in September, he resided in Austin.