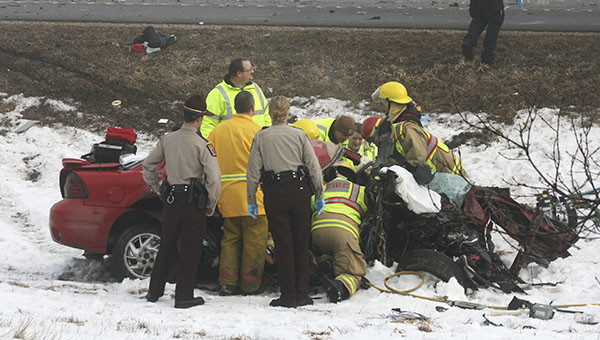 First responders work to remove a driver from a wrecked car on Feb. 1, 2012, on Highway 13 just north of the junction with gravel 280th Street. -- Tim Engstrom/Albert Lea Tribune

Traffic fatalities within Freeborn County increased during 2012 after three years of steady decreases.

There were five fatalities within the county, two of which stemmed from drivers who suffered medical conditions prior to the crashes, according to records compiled by the Tribune.

Across the state, there were 161 fatal crashes, according to preliminary numbers from the Minnesota State Patrol.

The following is a brief synopsis of each Freeborn County crash:

• Twenty-seven-year-old Felicity Mathieu of Alden died Feb. 1 after her car collided head on with a semi pulling a trailer full of hogs about three miles north of Manchester on Minnesota Highway 13.

According to Freeborn County Sheriff’s Office reports, Mathieu was driving northbound in a 2004 Pontiac Grand Am when she crossed the center line and struck a southbound blue International semi head on.

The crash happened at a slight bend on Highway 13 in heavy fog just north of gravel 280th Street.

Mathieu was extricated from her car and taken to the Albert Lea hospital, where she later died.

The driver of the semi, Tye H. Kleeburger of Kasson, survived the crash unharmed.

• Chad Nathan Williamson, 43, of Glenville died Feb. 10 after his 1999 Ford Expedition rolled over near 900th Avenue east of London.

He was the lone occupant of his vehicle.

According to reports, Williamson was traveling east on State Line Road when his Expedition left the roadway, entered the north ditch and rolled several times.

The crash was reported just prior to 8 a.m. Feb. 10 but may have occurred sometime the night prior.

• Forty-seven-year-old Michael “Bass” Skov died April 14 after his vehicle collided head-on with another vehicle on Minnesota Highway 13 about 1 1/2 miles north of Albert Lea.

Minnesota State Patrol reports indicated Skov was driving a 1993 Buick LeSabre north on Highway 13 when he crossed into the southbound lane and collided with a 2008 Cadillac CTS just after 10:30 p.m.

The driver of the Cadillac, Alex Kast, 17, and passengers Chaz Mithun, 16, and Jeremy Hyman, 27, were treated at Mayo Clinic Health System in Albert Lea and released the next day.

Skov’s blood-alcohol content was found to be over four times the legal limit.

Skov owned the Bend in the Road bar in Manchester.

• Adam Richard Christenson, 30, of Albert Lea died July 13 after his vehicle rolled over about a fourth of a mile east of Twin Lakes.

According to reports, Christenson was driving east on Freeborn County Road 85 when he lost control of his 1997 Chevrolet pickup.

The truck reportedly entered the south ditch before crossing the road again, entering the north ditch and rolling one time. The truck was found righted onto its wheels after rolling.

Christenson was not wearing a seat belt and was ejected from the pickup. He was the sole occupant of the vehicle and was pronounced dead at the scene.

• Dale Ernest Bangert, 77, of Albert Lea died Dec. 31 after a head-on crash near the intersection of East Main and William streets in Albert Lea.

Bangert was reportedly driving eastbound on East Main Street in a 1993 Ford Taurus when he reportedly drove off the road in front of Albert Lea Car Wash, narrowly missed driving into the Albert Lea Animal Hospital and then collided head-on with a 1990 Honda Accord on East William Street.

Police stated he reportedly suffered a medical condition prior to the crash.

Also injured were Tone Daoheuang, 49, the driver of the Accord, and his passenger Oth Pathammavong, 37, both of Albert Lea.