AUSTIN — Mayo Clinic Health System in Albert Lea and Austin has officially completed the first phase of its expansion project at its Austin hospital. 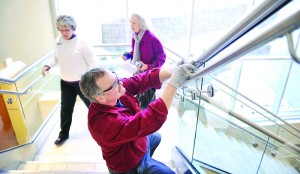 Even though employees got their first look at the Mayo Clinic Health System's expansion in Austin Friday morning, there were still finishing touches to be done. Here Tom Adams of All Metro Glass finishes work on a staircase connecting the first floor to the lower level. -- Eric Johnson/Albert Lea Tribune

Local Mayo administrators, staff and community representatives gathered inside the Austin location Friday to take in a sneak preview of the $28 million, 85,600-square foot expansion, which will open to the public (along with the main entrance) Monday.

“It prepares Austin to move ahead and be the leader in health care moving forward,” said Dr. Mark Ciota, CEO of Mayo Clinic Health System in Albert Lea and Austin.

The expansion itself is complete, and will open in three segments as clinic staff get situated. Starting Monday, the expansion’s lower level and first floor will be open, which includes the hospital’s Rehabilitation Services, Orthopedics, Podiatry, Pain Clinic, Eye Center, retail pharmacy, the Mayo Clinic store and Jazzman’s, a coffee shop. The expansion’s third floor, housing OB/GYN, Family Medicine and Internal Medicine, will open on Jan. 14, while the second floor, housing Family Medicine, will open Jan. 21.

The expansion is a welcome addition for clinic staff, who are glad patients won’t have as difficult of a time navigating the Austin hospital’s floors to find the right department.

“It’s awesome,” said Cheryl Block, clinic manager in the surgical division. “It opens up more space for staff and for patients to find their way.” 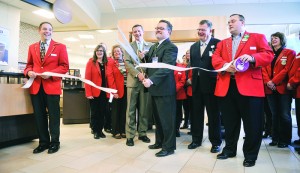 Yet Mayo Clinic Health System officials aren’t done with the project. The second and last phase starts Monday, as workers renovate more than 34,000-square feet of the hospital. That phase should last about six to 12 months and will deal with mostly clinic-related space and some administrative areas, according to Vice President of Operations Scot Ramsey, who will oversee the renovations.

The expansion is the result of more than four years’ worth of work, according to Vice President of Operations Rod Nordeng. About 962,000 pounds of structural steel and 14,000 bolts holding everything together were used in the expansion, with about 80 miles worth of low voltage or computer wire installed. In addition, the expansion was completed three months ahead of schedule. 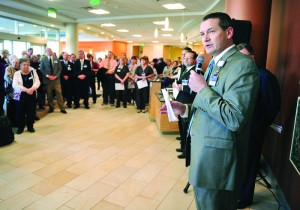 Mayo Clinic Health System officials said the project would bring about 70 new jobs into the area, though it may take some time before the hospital hires new people. According to Ciota, the hospital will hire more employees as more physicians come to Austin. Each physician will need about five to nine employees as support, and those employees will be hired in stages, Ciota said. Mayo Clinic Health System spokespeople said 14 new employees have been hired thus far.

The City of Albert Lea contracted Bolton & Menk to conduct a study of the traffic signals on Broadway Avenue... read more