Modern U.S. society could use the 3 Johns

Column: Thanks for Listening, by Scott Schmeltzer

My friend Angie Hoffman gave me a cool Christmas present this year. The really touching part of the gift was that it was based on a column I wrote eight years ago in 2005. 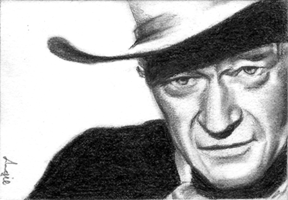 The present was a culmination of the three drawings that you see on this page. Angie drew all three for me. The present was a drawing of John the Baptist. Over the last few years, she has given me two other drawings — one of Johnny Cash, and one of John Wayne. The three Johns she drew for me were inspirational icons as I grew up and also helped to forge a bond between my father and me. Thank you so much, Angie. You are a true friend. I will now share the column that these three amazing drawings are based on.

What is missing in today’s society? I was pondering this question the last few weeks, and I think I finally have the answer.

John. Yes, John. This name is pretty plain and common in our society, but when I was growing up there were three Johns my dad read, listened to or watched and all three made an impression on him. My dad, as I have previously written, was my hero and if he looked up to these people, of course, I also looked up to them. 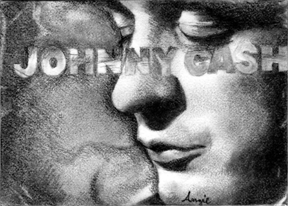 The first John I remember from my youth is the gruff and tall actor, John Wayne. I know I watched every film he ever made, usually watched them with my dad.

One of my earliest memories is watching “Fort Apache” with Dad. For two hours not a word was spoken between us because The Duke was on TV. The Duke made his roles come to life and whether he portrayed a cowboy or a soldier, you just believed in everything he did and represented. He made you proud to be an American.

From his early movies, such as “Stagecoach” and “Who Shot Liberty Valance” to later roles in “Rio Bravo” and “True Grit,” the Duke laid out on film what you should be in life; an underdog fighter who stood up for what you believed in, even when the odds were against you.

I remember John Wayne’s last role in “The Shootist,” because he played the part of an old gunslinger dying of cancer, imitating his real-life fight with the disease. John Wayne has been gone for more than 30 years and there has yet to be an actor who can fill the role of American icon as well as he did. 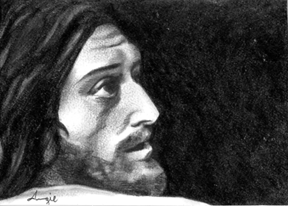 The second John that was part of my childhood was Johnny Cash. Johnny Cash’s albums (vinyl discs were what music used to be played on before CDs were invented, in case you are under 30 and didn’t know that) seemed to always be playing on our family’s turntable.

Songs such as “Ring of Fire,” “Sunday Morning Coming Down” and “A Boy Named Sue” were replayed so many times that you could tell your favorite records by their scratches.

The Duke’s movies were about America and freedom and overcoming adversity.

Johnny Cash stood for what he believed in and the Man in Black did not back down from either his own demons or the demons of others.

Johnny Cash died not all that long ago and whether young or old, I think you’d be hard-pressed to find anyone who doesn’t respect either his music or his faith in humanity.

The third John that I grew up with is John the Baptist. My father and mother gave all of their time and money to allow my brothers and sisters to grow up with the word of God in our lives. John the Baptist always intrigued me the most because of his dedication and his prophecy about Jesus, then recognizing Jesus as the Messiah and then baptizing him.

John the Baptist, like both John Wayne and Johnny Cash, was not perfect. Unlike them, John the Baptist was executed for speaking out about King Herod.

So you see in many ways these three Johns, along with my father, helped pave the way from my childhood thoughts about life to what I am open to today. I still like the underdog that takes on the big bully; I still love someone who faces their demons and comes out on top; and I still believe in God and the American flag.

I think a lot of us got tired of being fooled and tricked by unethical people and businesses and we have forgotten to look for genuine people.

Dad, thanks for sharing with me three good people that helped shape my future and while you’re up there listening, could you send us a few more? Society sure could use some.