Myrtle cemetery to get veterans memorial

MYRTLE — Three cousins, who are World War II veterans, may finally see their dream of a 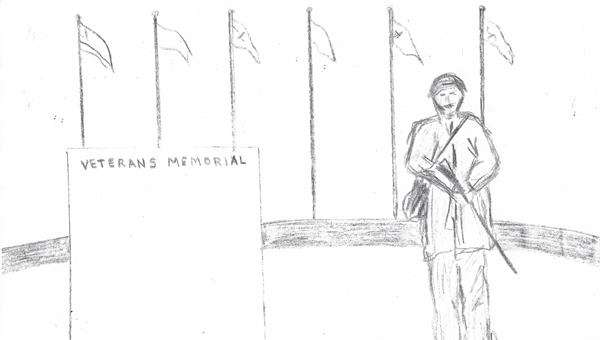 This rough sketch shows what a World War II veterans memorial could look like at the Bohemian Cemetery near Myrtle. --Drawing by Linda Kral

memorial come true, but they need help from the community.

These three men all entered the service from Freeborn County and hope to commemorate all the veterans buried, as well as those who will be buried, at the Bohemian Cemetery north of Myrtle. The cousins are Ernest Benesh, 86, of Owatonna, Emil Prantner, 93, of Austin, and Milo Belshan, 90, of Northwood. 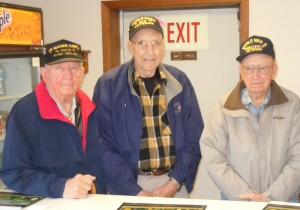 “We had the idea, but we put the legwork on the younger ones,” Belshan said.

And quite a few young ones are helping with the cause. Various people and organizations have gathered together to help the three veterans’ dream come true. And they’ve already raised more than half of the total $10,000 needed for the project.

A special event will be this Sunday at the Glenville American Legion to help raise funds for the memorial. People will have the chance to meet Belshan and Prantner at a pancake breakfast and bake sale. Benesh won’t be able to make it to the breakfast but said he hopes people come to support the proposed memorial.

“We’d been talking about it for quite a while, and we thought we should do this,” Benesh said.

The memorial will have a granite wall that will depict veterans’ names, a statue of a soldier, flags for each military branch and sidewalks.

The Glenville Women of Today is the nonprofit helping to manage the funds that are already raised. The group also hopes to work on a grant with the Daughters of the American Revolution.

“Basically a lot of people are pulling together for a good cause,” Women of Today member Linda Kral said.

The Glenville American Legion Auxiliary have also helped at fundraising events and will help this Sunday. And Spencer Krier, a Glenville teen, held a sloppy joe fundraiser on Dec. 15 to help raise money for the memorial.

The three cousin veterans became serious about the memorial after seeing a veterans memorial in Northwood at Swensrud Park. All three men served in World War II, though in different capacities. Benesh was a Marine who fought in Guam and Iwo Jima. Prantner was in the Army; he landed at Normandy and also fought in the Battle of the Bulge. Belshan was also in the Army; he fought in several battles in Papua and Dutch New Guinea.

Donations can be sent to the attention of Glenville Women of Today at Citizens State Bank, 300 W. Main St., Glenville, MN 56036.

What: Pancake breakfast and bake sale

Why: Donations and proceeds go to creating a World War II veterans memorial at the Bohemian Cemetery near Myrtle