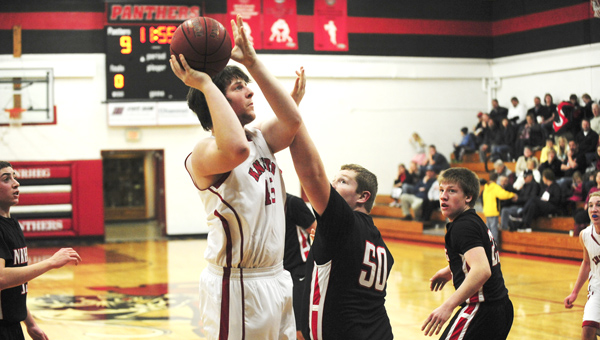 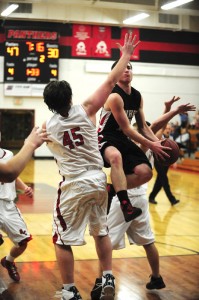 Nic Mngskau, a senior guard from New Richland-Hartford-Ellendale-Geneva prepares to lay the ball up against Elijah Rinehart of Alden-Conger. --Micah Bader/Albert Lea Tribune

“When you can jump on a team like that, it gets a lot easier,” Panthers’ head coach Pat Churchill said. “It helped us feel at ease a little bit.”

However, Alden-Conger awoke and cut its deficit to three points with a basket from long range by junior forward Matt Erickson.

“We’ve battled back in quite a few games this year, but we need to get over the hump,” Knights’ head coach Bill Hintz said.

But senior guard Nic Mangskau and his Panther teammates wouldn’t allow that to happen.

Mangskau hit all three of his 3-point attempts in the first half, including one right before the halftime buzzer, which gave NRHEG a double-digit lead (27-16) and deflated the Knights’ comeback effort.

“Nic had a really nice first half,” Churchill said. “I felt we did some good things offensively against their 3-2 zone. We didn’t rush shots and moved the ball around to get good looks.”

The Panthers are improving their free throw shooting. Churchill said his team was shooting below 30 percent earlier this season, but they were a perfect 11/11 against Alden-Conger.

NRHEG improves to 3-8 on the season, while Alden-Conger falls to 1-8.

Next, the Panthers play at Granada-Huntley-East Chain at 7:30 p.m. Tuesday, while the Knights play at Randolph at 7:15 p.m. Friday.