Funeral services for Paul J. Kelly of Albert Lea will be at 10:30 a.m. on Friday at St. Theodore Catholic Church, Albert Lea. The Rev. Timothy T. Reker and Deacon Mike Ellis will officiate.

Interment will be in St. Theodore Cemetery. Military honors will be accorded by Albert Lea veterans organizations. Visitation will be from 4 to 7 p.m. Thursday at Bonnerup Funeral Service, and one hour before the service at the church. 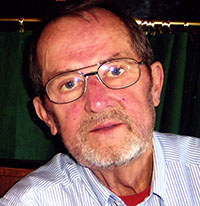 Paul died peacefully at his home on Saturday, Dec. 29, 2012. He was 71. He was born on Jan. 23, 1941, in Decorah, Iowa, the son of Frank and Mary (Knox) Kelly. Paul graduated from Canton High School in Canton. He served the country in the U.S. Army in Germany for two years before receiving his honorable discharge.

Paul married Peggy Lyndahl on July 26, 1969, at the Assumption Catholic Church in Canton. He had worked as a tuck pointer for Surety Waterproofing in Rochester, then for People’s Natural Gas for 25 years, and later People’s Service, before retiring in 2004.

He was a member of St. Theodore’s Catholic Church, the American Legion and VFW. Paul was an avid football fan with his favorites being the Green Bay Packers and the Minnesota Gophers.

He became a wrestling enthusiast as he watched his grandsons compete. He enjoyed watching all sports, especially the ones his grandsons participated in.

He is survived by wife Peggy, daughter Ann, her husband Dan Glazier and grandsons Zach and Cole, all of whom made him so proud. He also leaves sisters: Marilyn Erickson of Houston, LaDonna (Cleon)Brenno of Canton, Mary (Lynn) Martinson of Monona, Iowa; brothers: James (Vergene) Kelly of Canton, Douglas (Rita) Kelly of Rochester, and Robert (Lisa) Kelly of Dodge Center; sisters-in-law: Donna Kelly of Cresco, Iowa, Carolyn Kelly of Harmony, Mary (Cy) Snyder of Neenah, Wis., brother-in-law Hubert Vannatter of Rogers, Ark., and many nieces and nephews.

Paul was preceded in death by his parents Frank and Mary Kelly and brothers Frank Kelly Jr. and Leo Kelly.