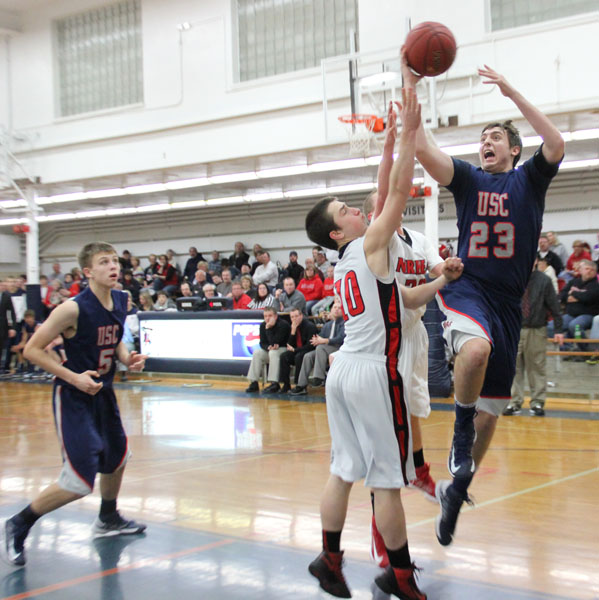 United South Central senior guard Cole Stencel jumps Friday past two New Richland-Hartland-Ellendale-Geneva defenders as he scores a layup in the first half. Stencel scored the bulk of his points in the first half. – Heather Rule/Albert Lea Tribune

“I thought especially the first half we really set the tone with our defense,” said Rob Stevermer, United South Central coach. “I’d say that was probably the biggest thing. Defense and then our ability to push the ball up the floor and get it inside.” 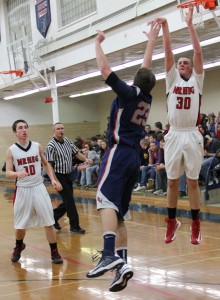 New Richland-Hartland-Ellendale-Geneva sophomore guard Spencer Tollefson leaps Friday from behind the arc to drain a three-pointer during the final minute of play in the first half against United South Central. The visiting Panthers trailed 37-23 at the half. – Heather Rule/Albert Lea Tribune

The Rebels got of to an 8-0 run to start the game and kept building from there. With the win, the Rebels remain undefeated in the conference at 7-0, 9-7 overall. New Richland-Hartland-Ellendale-Geneva fell to 4-12 with the loss.

The Panthers’ coach Pat Churchill was disappointed in the first-half play by his team. He gave credit to the Rebels for being a physical team and the job they did beating the Panthers inside. The Rebels were 12-for-16 in the paint during the first half.

The Rebels padded their lead after halftime by getting a few three-pointers in the first few minutes. The visiting Panthers didn’t go away though. They battled back and cut the lead down to 13 a couple of times, but it just wasn’t enough.

United South Central didn’t just hit their shots from beyond the arc and in the paint. The players made it count at the free-throw line. They were 18-for-21 as a team.

“I think that’s got to be the best percentage that we’ve shot all year,” Stevermer said. “We got to the free-throw line and made free throws. We cashed in on those opportunities.”

It was a balanced scoring effort from the Rebels. Senior guard Trey Allis led the team with 15 points, followed by sophomore guard Nate Pederson and senior guard Cole Stencel with 13 points each. Junior forward Steve Voigt also got the team off to a good start with some buckets in the paint. Allis also made some really nice passes, and junior guard Walker Linde knocked down some big shots for the Rebels as well, their coach said.

Stevermer was pleased with the strong overall team effort.

“We had a lot of guys step up and play good minutes,” Stevermer said.

As for Churchill’s Panthers, he thought his team played much better after the break. They were better defensively and got right up close to their opponents when guarding them, rather than being a few feet back, he said. 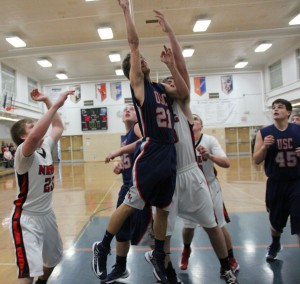 Teammates and opponents look on Friday as United South Central junior guard Nate Mattick scores from the paint in the first half. He finished with 7 points for the night. – Heather Rule/Albert Lea Tribune

“We got more intensity on defense,” Churchill said. “We kind of got after it. Offensively, got the ball inside and got some looks.”

For the Panthers, sophomore forward Kevin Kalis had 12 points and 11 rebounds. Sophomore guard Spencer Tollefson led the scoring with 18 points. He hit a couple of three-pointers in the second half to try and narrow the deficit. They made a concentrated effort to get the ball in the post a little more in the second half, which opened up the shots more for Tollefson, his coach said.

“He had a nice second half,” Churchill said. “He had a tough time in the first half when they were really focusing on him.”

Both teams are back in action Tuesday for conference play. United South Central travels to Randolph, and New Richland-Hartland-Ellendale-Geneva hosts Bethlehem Academy.