Funeral services for Robert Joseph “Bob” Schreiber, 87, of Albert Lea, will be at 11 a.m. Wednesday at the Bonnerup Funeral Service Chapel in Albert Lea. The Rev. David Schreiber will officiate. Interment will be at Hillcrest Cemetery. Visitation will be from 5:30 to 8 p.m. Tuesday at the Bonnerup Funeral Service Chapel and one hour prior to the service. Bob passed away on Friday, Jan. 25, 2013, at St. John’s Lutheran Home. 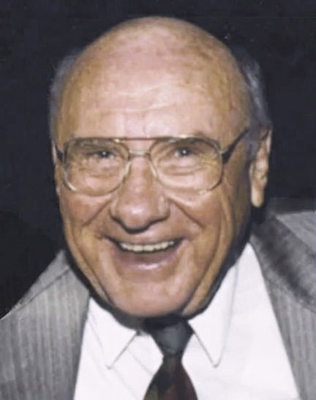 Robert Joseph Schreiber was born on Jan. 6, 1926, to Edward C. and Anna (Peschek) Schreiber in Wagner, S.D. He attended Wagner Public Schools. In high school he played trumpet in the band, was on the debate team, was in chorus and dramatics and played varsity basketball and football (going to the conference championship) while working 40 hours per week at the local drug store. Following graduation in 1944, he served his country in the United States Army during the final stages of World War II in Europe. After the war, he worked for a short time in the dental department for the Veterans Administration. Quickly realizing that life behind a desk was not for him, he took a traveling sales position with Bahr’s Beauty Supply in Sioux Falls, S.D. It was during one of his sales calls in Faribault that he met Marjorie Mae Bosshardt. He and his “Little Margie” were united in marriage on April 23, 1949, in Faribault. Together they lovingly raised six children: Sue Ann, Steven Jay, David Dale, Todd Robert, Karrie Kay and James Stewart.

In 1955, after having worked for Bahr’s for eight years, he partnered with one of his clients, T. Dean Borland, opening Bo-Dean Beauty Supply Inc. “Bo-Dean Country” included southern Minnesota, northern Iowa, and parts of western Wisconsin and eastern North and South Dakota. Bob greatly enjoyed his profession and continued in the beauty industry for more than 60 years. He loved to drive and he enjoyed washing and waxing his cars. He was always on the search for the perfect wax. Sports were also a favorite pastime, particularly golf.

His faith in God and his commitment to his beliefs were very important to him. Bob was a member of the United Church of God, serving faithfully as a deacon for many years. He genuinely loved people and was well loved by all who knew him. He was especially passionate about spending time with his family and friends. A devoted family man, he was married to the love of his life, Marjorie, for 62 years. He had the remarkable ability of letting each member of his family know just how special they were and how much he loved them. He was always encouraging and uplifting.

Bob touched the lives of so many people and will be greatly missed.

He was preceded in death by his beloved wife, Marjorie; and three brothers, Neil Schreiber, George Schreiber, and Richard Schreiber.