ST. PAUL  — In a day devoted to the ceremonial transfer of power at Minnesota’s Capitol, a Legislature now under complete Democratic control offered early clues Tuesday of the priorities and skirmishes that lie ahead. 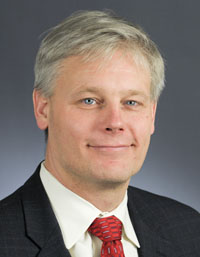 New House Speaker Paul Thissen said the first batch of bills would attempt to whittle away at state IOUs to schools, give rebates to more property taxpayers, install a health care insurance exchange and prop up business investment grant programs. Meanwhile, Republicans relegated to the minority tried to drive a wedge between urban and rural Democrats.

Lawmakers will spend the next few months trying to close an estimated $1.1 billion deficit, which is likely to provoke a major debate over Gov. Mark Dayton’s frequently repeated desire to raise income taxes on the wealthy. New Democratic majorities are eyeing ambitious policy overhauls, and supporters of same-sex marriage are preparing a push to legalize it.

On the first day, lawmakers mostly laid aside their differences in favor of getting organized and welcoming the new members who make up more than a quarter of the Legislature. The first bills won’t be introduced until Thursday. Many lawmakers were joined by their loved ones during opening floor sessions.

Freshman Rep. Dan Schoen, a Democrat from suburban St. Paul, said he was elated and humbled to take a seat in the House. The police officer, a self-described “average fella,” said he’s eager to get to work after a long election season.

“It’s not my seat. It’s our seat,” Schoen said. “I’m excited to have the opportunity.”

He is part of an unusually large class of freshmen lawmakers. In all, 57 new members had to be sworn in, guaranteeing a slow start while new members get up to speed.

Newcomers voiced a desire to bury the type of partisanship that stymied progress at the Capitol in recent history. And the new leaders — elected on predictably partisan votes — pledged a new tone.

Even so, glimmers of partisanship peeked through the opening-day harmony. Sen. Sandy Pappas, the veteran St. Paul Democrat newly minted as the Senate’s president, contrasted the new Democratic rule with the Republican majorities they vanquished.

“Today we make our final transition from divisive partisan politics to governing,” Passas said to smirks or eye-rolls from some Republican senators. As Senate president, Pappas’s chief role is to preside over floor debates.

In the House, a minor skirmish broke out over the chamber’s rules when Republicans tried to shift control of the state’s agriculture budget away from a committee led by a Minneapolis Democrat, Rep. Jean Wagenius. In an attempt to sow division among urban and rural Democratic members, GOP Rep. Rod Hamilton raised concerns that agriculture issues will get short shrift.

The state Republican Party went further, blasting out a news release noting that Wagenius once described herself as a “Mother Earth Feminist.” House Democrats quashed the move with a procedural motion, but it’s certain to resurface.

Thissen said House Democrats plan to make good on campaign promises by passing legislation to send schools hundreds of millions of dollars in aid that was deferred during past budget crises. Thissen said lawmakers would work to increase eligibility for a program that delivers rebates to homeowners who pay a certain amount of their income in property taxes.

Both moves, as well as a few others on the Democratic to-do list, only add to budget strains.

“I would just question whose taxes are they going to raise to lower somebody else’s? That’s going to cost a ton of money,” said Rep. Greg Davids of Preston, now the longest-serving Republican at the Capitol.

Several dozen home health care workers loudly chanted outside both chambers during the opening floor sessions; they are seeking legislative authorization to unionize under the banner of the Service Employees International Union, a powerful Democratic ally. That would likely be followed by a push for higher wages.

“The wages aren’t good. There are no benefits, no training,” said Priscilla Harris, a home health care worker from Minneapolis who came to the Capitol to demonstrate. “They toss us aside like we’re not real workers. But we are real workers, and we want the respect of real workers.”

And Minnesotans United, the group pushing for legal same-sex marriage, sent a fundraising appeal Tuesday morning noting the start of the session and outlining some of the group’s early steps as they prepare to mount a lobbying effort. A big debate over gay marriage could highlight divides between those Democrats who want it legalized now and others worried about alienating some constituents.

Republicans, lacking much real power at the Capitol, promised to work with Democrats when appropriate but also to highlight differences. “We think it’s constructive to have a robust debate on matters where we have dissenting views,” said the new Senate Minority Leader, David Hann of Eden Prairie.

Dayton will be on the sidelines in the session’s opening days as he continues to recover from back surgery. He is slated to deliver his two-year budget proposal by Jan. 22.

Before session, veteran GOP Rep. Jim Abeler predicted rancor would surface before long but he hoped both parties could find common ground — or at least keep it civil.

“If you don’t hate anybody it helps a lot,” said Abeler, of Anoka. “You can’t do a deal with somebody you really don’t like.”