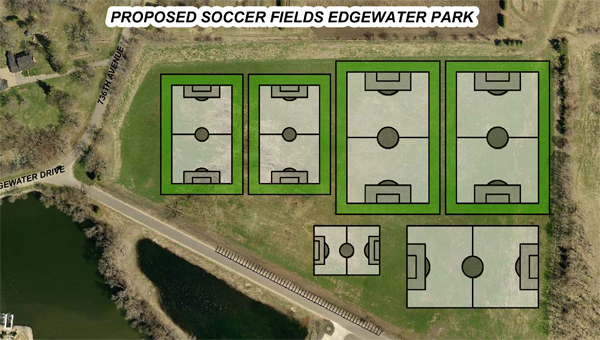 A rendering of the six-field soccer complex at Edgewater Park has been developed by the Albert Lea-based Jones, Haugh & Smith engineering firm. --Submitted

The Albert Lea City Council is slated to vote Monday on whether to approve a contract to develop a six-field soccer complex at Edgewater Park.

If approved, the contract would authorize the Albert Lea Youth Soccer Association to move forward with plans for the complex across from the new pavilion.

A rendering of the six-field soccer complex at Edgewater Park has been developed by the Albert Lea-based Jones, Haugh & Smith engineering firm. --Sarah Stultz/Albert Lea Tribune

The association, which has been in place for more than 25 years, would pay to develop the fields — including leveling the land, and then tiling, grating and seeding it for use — but the city would still own the property. Greg Wilson, with the association, said if everything was developed as the association is planning the project is estimated to cost about $150,000.

After the project is completed, the city would continue to mow and fertilize the field and the association would stripe the field, according to a proposed agreement. The property would potentially be leased back to the association for 20 years.

Wilson said the fields would be used by children ages 9 to 17 and would range in size to accommodate different age groups. A field used by 9- and 10-year-olds is between 60 to 80 yards long while a regulation field is 100 to 120 yards long.

“Our goal long-term is to hopefully start an area soccer club instead of just one in Albert Lea,” he said. “The location will be awesome with the lake there and the pavilion.”

Wilson said with some of the other soccer fields in Albert Lea deteriorating, the association began talking about the possibility for a soccer complex at least five years ago.

Their are currently soccer fields at Memorial Park, Lakeview Park and a few on the Albert Lea School District grounds.

“I think for that area it’s a good use for that green space,” said Albert Lea Parks and Recreation Director Jay Hutchison. “I think it will bring more use to that park and it gives the city another athletic facility for our youth.”

The fields would be located on the site of the former North Edgewater Park landfill, which was cleaned up in 2008 and 2009 with state funds awarded to the city and the Minnesota Pollution Control Agency. The waste from the site was transferred to a composite-lined cell at the Albert Lea Transfer Station and the site has remained empty since.

Hutchison said there is a discussion about imposing a player’s fee by the city to the association to cover the costs of maintenance of the field, but that would have to be approved in the agreement. The city would schedule the fields working with a representative of the association.

“Doing this complex will be able to get more people together,” he said.

If the contract is approved Monday, Wilson said the association will begin its fundraising efforts and hopes to begin the project as soon as the ground thaws this spring.

If everything goes as planned, the fields would be in use by May or June of 2014.