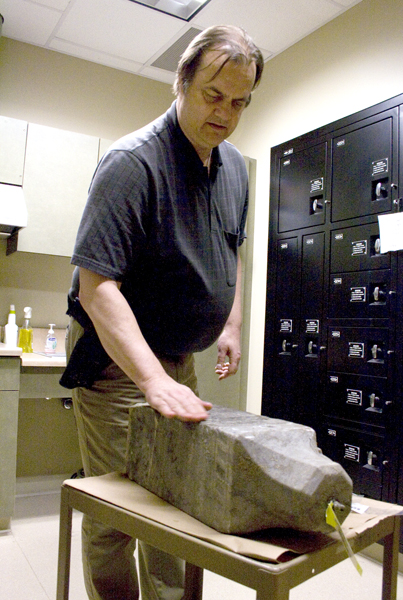 Albert Lea Police Department detective Ben Mortenson looks at a tombstone that police found while conducting a search warrant at an Albert Lea home in 2009. Police have been trying to return the stone to its proper place for three years. -- Sarah Stultz/Albert Lea Tribune

Stolen Itasca  tombstone to be returned 3 years after recovered

A tombstone stolen from an old Freeborn County cemetery more than three years ago is finally being returned to its proper place.

The stone, belonging to 2-year-old Edna Victoria Bickford, of the pioneer community of Itasca, is estimated to weigh 450 pounds. It was found by Albert Lea police while conducting a search warrant May 10, 2009, at 815 Minnesota Ave. 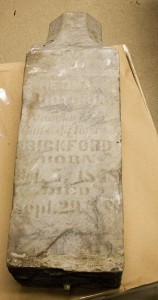 The tombstone dates back to the 1870s.

In the house searching for other stolen property, police saw the tombstone and “knew it didn’t belong there,” said Community Service officer Mary Schroader.

They seized the stone, and it has been sitting in the evidence room of the Law Enforcement Center ever since as officials worked to find out who the old, weather-worn marker belonged to.

Because of the condition of the stone — with several of the letters and numbers worn off — Albert Lea Police Department detective Ben Mortensen tried to perform a gravestone rubbing to better read the information on the stone.

The name was readable, but the complete birth and death dates were not.

Using what information he had, Mortensen looked up the last name “Bickford” in the police logging system to see if there had been any contact with someone with that name in recent years.

He said he tried contacting Lakewood, Graceland and St. Theodore Catholic cemeteries to see if they had anyone with little Edna’s name and also emailed the Minnesota Department of Health requesting information from the county the girl died in, but to no avail.

About a month later, Freeborn County dispatcher Vickie Storlie, who enjoys researching genealogy and who volunteers at the Freeborn County Historical Museum, discovered the tombstone had been in the Itasca Cemetery, off of Freeborn County Road 101, northwest of Edgewater Park.

Hensche, a volunteer at the cemetery, said he received a call from Linda Evenson, librarian at the historical museum, two weeks ago asking who she could contact from the cemetery about the stone. Little did they know at that point that it was a stone that actually belonged to one of Hensche’s ancestors.

“What are the odds of this?” he said when he realized the connection. 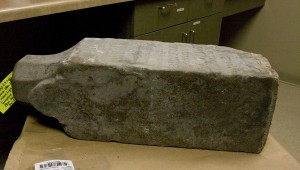 A tombstone stolen from Itasca Cemetery three years ago sits on a cart in the evidence room of the Law Enforcement Center. -- Sarah Stultz/Albert Lea Tribune

“I kept thinking to myself, why did they have such a nice great big tombstone for him and nothing for the daughter,” Hensche said.

He said he plans to pick up the stone within the next week and restore it to its original location this spring.

“I’m glad he came forward and is going to do this,” Schroader said.

Who was Edna Victoria Bickford?

The youngest daughter of Charles and Almira Bickford, Edna Victoria Bickford died Sept. 29, 1881, of diphtheria shortly before turning the age of 3.

Her obituary stated, “Edna was a lovely child and the bloom of health was on her cheek only a few days since, but she was taken sick with that much dreaded disease, diphtheria, and only lived to suffer one short week.”

She was buried in the Itasca Cemetery but may have been moved to Graceland Cemetery after her mother’s death.