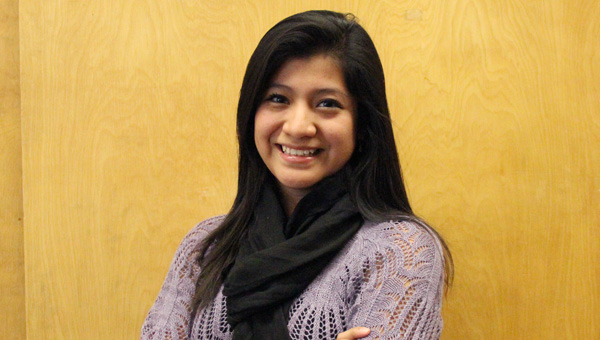 An Albert Lea High School senior recently received the Paths to Peace of Freeborn County scholarship for her volunteer work, and the 17-year-old hopes to continue helping people in college and in her career.

Marleny Huerta-Apanco accepted the $500 scholarship at the Martin Luther King Jr. Day Breakfast held annually at First Lutheran Church in Albert Lea. She said she applied for the scholarship earlier, and the application process involved verifying service work she has done and writing an essay about her commitment to service.

“At first it was difficult to write, and then I thought about things I’ve done,” Huerta-Apanco said.

And the list is long for a busy high school senior who also played soccer and is involved in choir and mock trial. Some of her service work includes working with Teens Encounter Christ, a seminar that’s held four times a year. She also goes on mission trips, like one to Pine Ridge Indian Reservation in South Dakota, through St. Theodore Catholic Church. She’s also on the Youth Advisory Committee and has spent two years on the Link Crew, which welcome new students to the high school.

“I’ve seen a lot that has inspired me to continue to do that,” Huerta-Apanco said.

Huerta-Apanco, who is Hispanic, said sometimes it has been hard to be the a minority in certain groups like Link Crew. But that struggle has inspired her, too.

“It’s difficult, but in Link Crew I can reach out and help younger students who are like me,” Huerta-Apanco said. “I can inspire other students to do the same.”

Volunteering has made a difference in Huerta-Apanco’s life, and she enjoys seeing how love can impact the lives of others.

“It’s incredible to see someone accept it and grow from it,” Huerta-Apanco said.

“She’s someone who brings people together and really models peaceful behaviors and peaceful living,” Corey-Gruenes said. “She’s got a maturity that’s beyond her years in that regard.”

Huerta-Apanco — who lives in Albert Lea with her parents, Ramon and Catalina, and 13-year-old brother, Anthony — is excited to finish up high school. She doesn’t yet know where she wants to go for college, but she wants to get a four-year degree studying pre-medicine.

Her dream right now would be to possibly be a pediatrician someday, and she’d also like to travel. For right now, she knows that she wants to keep volunteering while figuring out her career.

“I definitely want to make it a priority,” Huerta-Apanco said.