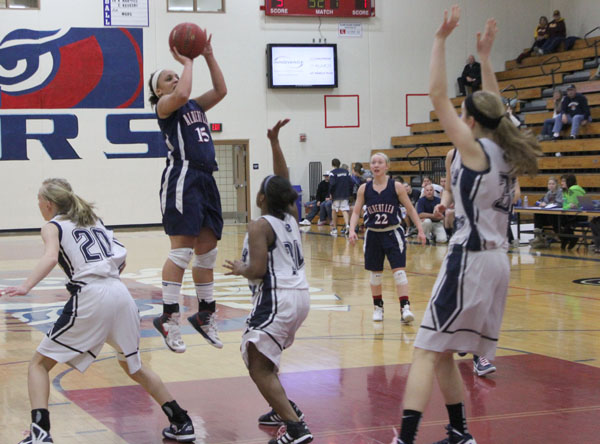 Sometimes you don’t need anything more than a couple words to sum up a one-point win.

Albert Lea edged Rochester Century 39-38 Tuesday in Big 9 play. The win propelled Albert Lea to a three-game winning streak – its longest one of the season. The Tigers also got back to .500; they’re now 7-7 overall.

The Tigers had a close, two-point loss to Rochester John Marshall in December, but this game might top the list so far for big and exciting games. 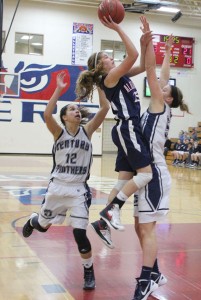 Albert Lea junior guard Sydney Rehnelt jumps Tuesday for a shot while being closely guarded by a Rochester Century opponent. Her shot was off the mark, but teammate Dominique Villarrea grabbed the rebound and put it in the hoop. – Heather Rule/Albert Lea Tribune

Late in the game, Century led 36-33. Albert Lea sophomore guard Megan Kortan made her two shots from the line to bring the Tigers within one. Those were big shots when you look at the team’s free-throw stats for the night: 9-for-18 when they want to be at 70 or 80 percent, Hugstad-Vaa said. Even in what some might consider a pressure-cooker situation, Kortan said she didn’t feel the pressure.

“We practice a lot of free throws in practice, so that helps us out a lot,” Kortan said. “We all know to make our shots when we need to.”

Then junior guard Bryn Woodside scored a bucket to give Albert Lea a 37-36 lead.

“That was kind of a turning point for us,” Hugstad-Vaa said.

Albert Lea took a timeout with two minutes remaining. They were patient and held the ball. Woodside missed a layup and Century gained control with just more than a minute left. With 42.9 ticks still to go, Century senior Alecia Kupfer sunk both of her free throws to make it 38-37, Century. Another timeout for the Tigers to figure out a play, and Kortan came through again with the winning layup while there was less than 30 seconds left.

It wasn’t just Kortan that made that last bucket happen. She credited senior guard Danielle Staat with setting up a nice screen, and Kortan accepted a strong pass from Rehnelt.

“We all want to win, so we all work hard,” Kortan said.

The atmosphere was electric in those final moments. Both benches traded “Defense!” chants, and the home crowd really got behind their team. Century took one last timeout with 13.1 ticks on the board. A three-pointer for Century didn’t go, giving the victory to the Tigers.

“I was really excited and proud of them at how they battled,” Hugstad-Vaa said. “They executed the plays.”

Though it turned into a nail-biter in the final minutes of the game, each team had its chances with leads and maintaining control. Neither one let the other out of reach, however. 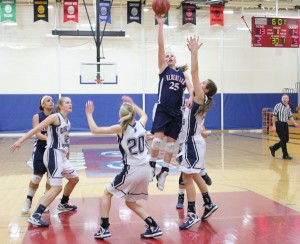 Albert Lea junior guard Sydney Rehnelt reaches Tuesday for a shot early in the game against Rochester Century. She played the most minutes on her team, with more than 17. – Heather Rule/Albert Lea Tribune

“I think our defense was really solid,” Rehnelt said, who had 10 points Tuesday. “Everyone was communicating really well. We had good composure throughout the game.”

The Tigers got off to a slow start, falling behind 11-3 before a timeout gave them momentum to come back and eventually take the lead. It remained close and Century took back the lead later in the second half.

For Albert Lea, they knew going in that the game was going to go through different flows, but even when they got behind in the second half, the Tigers were patient on offense and didn’t get rattled, Hugstad-Vaa said.

The Tigers travel to Winona Friday as they look to keep their win streak alive.

Kortan and Woodside talked about last week’s 57-43 win over Mankato West (the game that halted a losing streak) being a “confidence booster.” Tuesday’s win only seemed to gain more momentum for them in that respect.

“Now we just go into the next game and know that we can win this one because the confidence is wide open,” Kortan said.