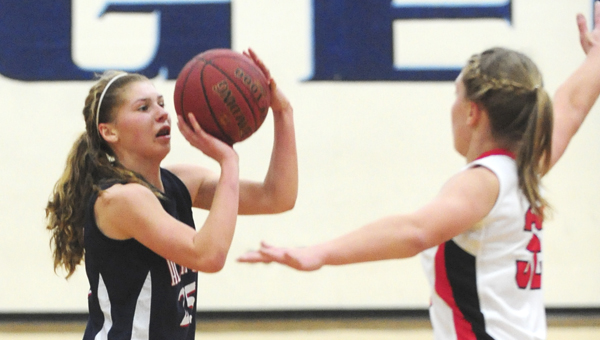 Sydney Rehnelt, a junior guard from Albert Lea, shoots over a defender from Rochester John Marshall. Rehnelt earned a team-high 26 points for the Tigers in a 70-44 loss. -- Micah Bader/Albert Lea Tribune

“Last time it was close, and we had a chance to win,” Albert Lea girls’ head basketball coach Lindsey Hugstad-Vaa said. “But this time, we just didn’t show up as strong for the entire game.”

At halftime, the Tigers only trailed by two possessions (28-22).

However, the Rockets caught fire from beyond the arc early in the second half.

“They came out and hit three 3-pointers,” Hugstad-Vaa said. “We started to get down, and it just compuonded.”

After John Marshall built a 30-point lead, the Tigers began to earn trips to the free-throw line. Trips that Hugstead Vaa would have liked to see earlier in the game. 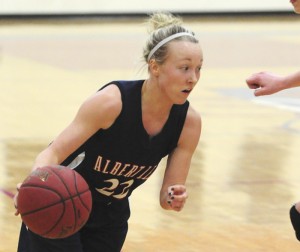 “It was really physical,” Hugstad-Vaa said. They have some big kids who could push their way around.”

Despite the 26-point difference on the scoreboard, Albert Lea had positives on both sides of the court.

Offensively, junior guard Sydney Rehnelt scored 26 points, going 4-of-7 from beyond the arc.

“She was attacking and getting to the line,” Hugstead-Vaa said.

Rehnelt was 10-of-12 from the charity stripe. She also earned six rebounds and three steals.

Dom Villareal led the Tigers with 13 boards along with three points, two assists and one steal.

“The kids crashed the boards hard,” Hugstad-Vaa said. “Dom had six offensive boards, which is awesome.”