Tigers skate to loss against Lourdes 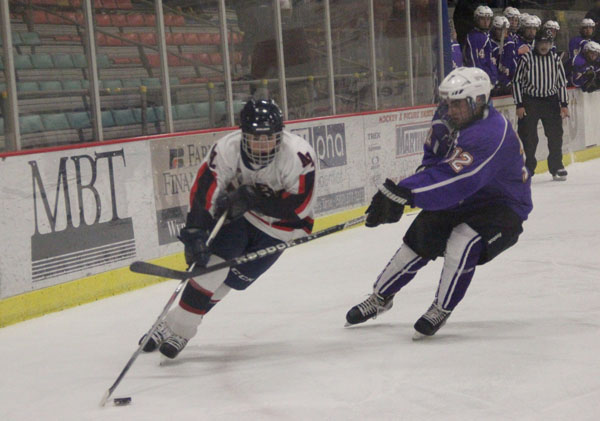 The Albert Lea boys’ hockey team wasn’t able to get enough pucks in the back of the net Thursday as they lost 5-1 to Rochester Lourdes.

“We had some opportunities. We just couldn’t find the back of the net.” 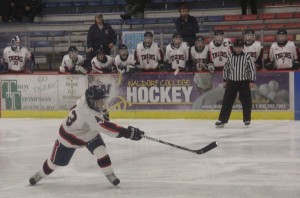 Albert Lea senior defenseman Darik Weigel follows through Thursday on a shot from the point in the second period. The Tigers tallied 7 shots in that period. – Heather Rule/Albert Lea Tribune

The Tigers got off to a strong start in the first period. They outshot Lourdes 10-2 in that first 17 minutes. The problem for the Albert Lea was, one of the two shots from the opponent went in. Lourdes senior Jason Samuelson took it himself for the first of his two goals on the night with 8:51 left in the first.

The second goal for Lourdes in the second period came on a shot from the top of the circles that went through traffic in front of the net. Lourdes took a 3-0 lead into the second intermission and came out with a quick goal in the third to make it 4-0.

“We got the puck real well,” said senior winger Nathan Stadheim said. “We had some good power plays.” 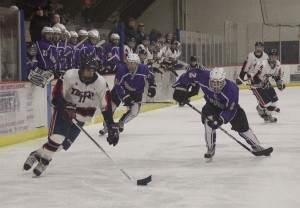 Albert Lea junior winger Van Zelenak takes the puck Thursday down the ice and into the Rochester Lourdes' zone. Zelenak had multiple chances at the net during the game. – Heather Rule/Albert Lea Tribune

Albert Lea was rewarded for its offensive efforts in the third period and cut the deficit to three. Sophomore Alex Claassen was on the doorstep to the goalie’s left and didn’t miss the chance to put away the rebound on a shot from the point, on a 5-on-3 opportunity. Junior Lucas Peterson and Stadheim had the assists.

Albert Lea went on the power play again late in the game. When the elbowing call came against Lourdes with 3:36 remaining, Albert Lea took its timeout, then took the faceoff with its goalie pulled. With more than three minutes left.

That left the Tigers with a 6-on-4 advantage until Lourdes sealed the game with an empty-netter with 26 seconds left.

For the game, the Tigers outshot Lourdes 24-19. Not being able to come out ahead in the goals column unfortunatlely wasn’t anything new for the Tigers.

“It’s been a whole-year thing,” said senior center Adam Herbst. “This year we really don’t have that one guy that can bury pucks.”

The loss sent the Tigers (7-13-1) on a three-game skid, while Lourdes (13-7) snapped a three-game losing streak. The last win for the Tigers came Jan. 15 against Austin.

Next up, the Tigers faceoff against Rochester Century at 3 p.m. Saturday at Rochester Graham Arena.