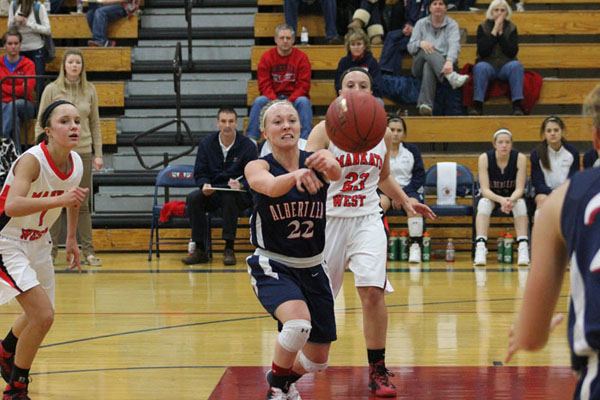 The losing streak for the Albert Lea girls’ basketball team is over, thanks in large part to 24 points from junior guard Bryn Woodside. The Tigers beat Mankato West 57-43 Tuesday night on their home court for a Big 9 win to stop the losing streak at two and improve to 5-7

“It’s always good to win in the conference,” Woodside said. “It was a good confidence booster.”

The first half was a tight one. The biggest lead Mankato West had was four points, but Albert Lea was there to match them and came out a point ahead at the break.

“It was basket for basket,” said Albert Lea coach Lindsey Hugstad-Vaa. “We knew it was going to be close.”

And it was, for most of the game. The Tigers came out in the second half with a 5-0 run, forcing Mankato West to take a timeout. 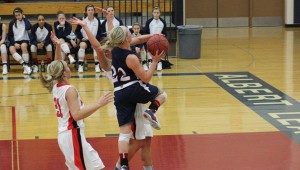 Albert Lea junior guard Bryn Woodside pushes Tuesday past two Mankato West defenders in her quest to the hoop for a layup. Woodside scored the bulk of her 24 total points in the second half. — Heather Rule/Albert Lea Tribune

Later in the second half though, scoring on both sides had gone cold for a few minutes as the Tigers clung to a 36-35 lead. But sophomore guard Megan Kortan sunk a three-point shot with just under six minutes left in the game to put her team up for good.

“I thought the team needed it,” Kortan said. “Gave us momentum going into the next play.”

What had been a close game between conference rivals began to turn more in favor of the Tigers. They grew their lead and took control of the final few minutes.

Defense was also the key to the win for the Tigers. They kept an eye on Mankato West senior forward Cara Christiansen and did a good job defending her, Hugstad-Vaa said.

“We had to be disciplined on defense,” Hugstad-Vaa said. “They stayed disciplined and stayed contained.”

Hugstad-Vaa praised the “overall team effort” in the win. She pointed out the good job of junior forward Grace Gjersvik, who hadn’t played much varsity basketball until Tuesday. Gjersvik hit a big three-pointer early in the game to tie it at 8 apiece; she had five points in the game. Kortan also had some great rebounding in the game, with nine, her coach said.

As for Woodside, her coach said she played aggressively and averages around 16 points per game, but even with the above-average offensive numbers Tuesday, Woodside was quick to pass the credit along to the other girls on the court.

“My teammates got the passes to me up the floor tonight,” Woodside said. “I was just there and put them in.” 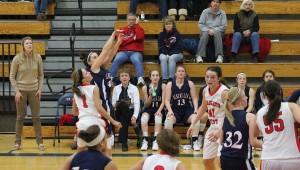 Albert Lea sophomore guard Megan Kortan releases the ball Tuesday for a three-pointer that put the Tigers up 39-35 in the second half. The Tigers never gave the lead back to the visiting Mankato West Scarlets. — Heather Rule/Albert Lea Tribune

She netted 17 points in the second half alone, including a three-pointer to cushion Albert Lea’s 5-0 run to start the second, some free-throw shots and a few layups. Not only did she put up some good stats, but she was also one of the more vocal players throughout the night, encouraging her teammates. Something one might expect from one of the team captains.

“I like to be vocal out on the court because I feel like it gets the team going,” Woodside said.

The Tigers travel to Faribault next for a game at 7:30 p.m. Friday.