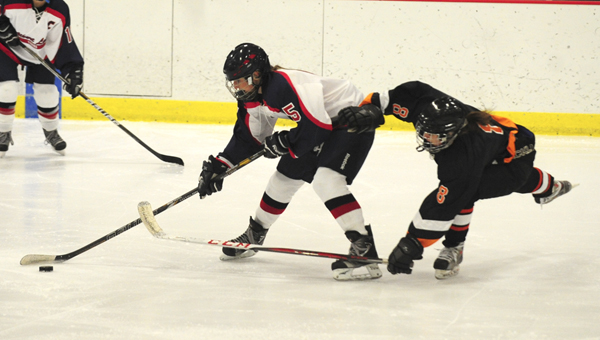 With less than 16 minutes left in the first period, Winona broke away to score the first point of the game on an unassisted goal. 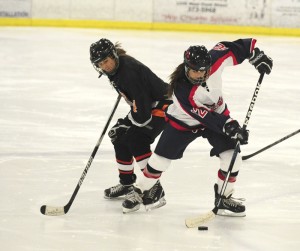 Sarah Savelkoul, a junior forward from Albert Lea, pushes the puck up the ice, as Molly Sanvik of Winona defends.

After Albert Lea threatened to score with multiple shot opportunities, Winona scored its second and third goals of the period.

In the second and third periods, the Tigers pushed to score, taking 27 shots, nine more than the Winhawks, but Albert Lea wasn’t able to climb out of its deficit.

However, the Tigers scored a goal on a pass from junior defenseman Kenzie Waldemar to freshman forward Hannah Savelkoul.

“We played great in the second and third periods,” Albert Lea head coach Paul Willett said. “We outshot them, but we need to find more ways to score.”