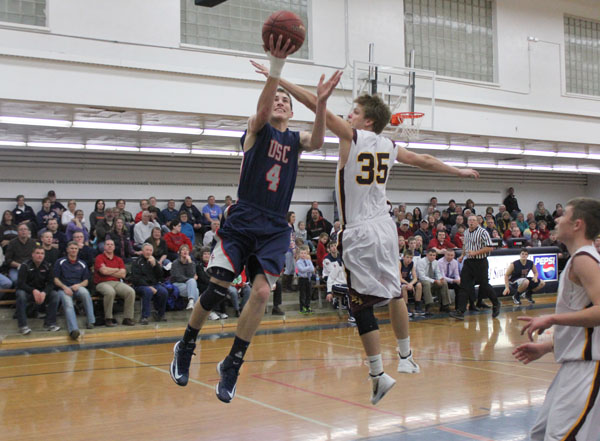 Take the beginning of the game, for instance. Blue Earth Area scored the first basket, followed by a three-pointer from United South Central junior guard Walker Linde. But Blue Earth Area answered quickly with a three to tie it at 5-5.

Those first few points told the story, in the game that United South Central lost 78-72. 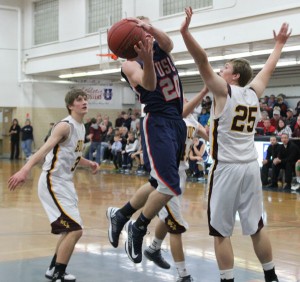 United South Central senior guard Trey Allis attempts Tuesday to go for a shot against Blue Earth. He made it to the hoop, but the points didn't fall. – Heather Rule/Albert Lea Tribune

“That was kind of the theme of the game,” said United South Central coach Rob Stevermer. “Is every time we kind of made a run, they’d score or get a little run right back at us.

“We didn’t score enough. Too much to overcome.”

Stevermer said he wasn’t exactly sure why that happened each time, except to give credit to Blue Earth Area for doing a good job of finding the open shots.

“And they made their shots,” Stevermer said. “They didn’t miss many open shots.”

Blue Earth Area senior guard Dallas Barslou didn’t seem to have much trouble finding the shots, from behind the arc, no less. He drained a total of eight three-pointers throughout the game – many in key spots – for a total of 32 points on the night.

Though United South Central made some runs and kept the game within reach, the shots were just falling one way and not the other.

Part of that was a testament to the Blue Earth Area defense, he said.

Blue Earth Area didn’t miss a beat in the second half, scoring five quick points to expand on its eight-point lead at the break. Blue Earth Area saw its lead grow to 15 points at times, as the shots kept falling.

The Rebels did not go down easily, however. They narrowed the gap a few times, but then the theme of the game came up again. United South Central got the score to 64-61 with a few minutes left, still trailing, when Barslou crushed the momentum with another three-point shot. And another. And another.

“We know he’s very capable of doing that,” Stevermer said, of the slew of threes from Barslou. 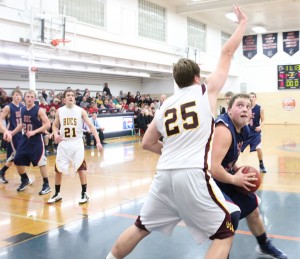 United South Central junior forward Steve Voigt prepares Tuesday to take his shot against the Blue Earth Area defender. Voigt made the bucket, drew a foul and completed the three-point play in the second half. – Heather Rule/Albert Lea Tribune

Stevermer praised sophomore guard Nate Pederson who came off the bench and “gave us some life” by being able to get to the basket. Senior guard Trey Allis is another one who always works so hard, his coach said. He struggled Tuesday with getting his shots to fall.

“Tonight, he didn’t have very good luck going to the basket,” Stevermer said.

The loss snapped a three-game winning streak for the Rebels. They’ve played well as of late, winning five of their last seven games. United South Central is now 8-7 overall.

Stevermer said he’s disappointed in the loss, but his team has played better. As for what to work on in practices, this loss doesn’t change anything. It’s still going to be the same things they’ve focused on, like passing, taking care of the ball and rebounding. Basically, keep hammering home the fundamentals of the game.

Next up for the Rebels is a conference game Friday at home versus New Richland-Hartland-Ellendale-Geneva.