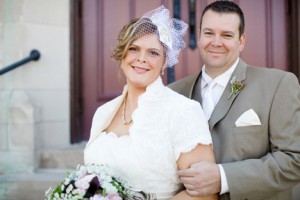 Nelson is the daughter of Bob and Donna Nelson of Alden. Her grandparents are Don Breamer and Verina and Martin Nelson, all of Albert Lea.

Hensley is the son of Gary and Gloria Hensley of Chillicothe, Mo.

His grandfather is Earl Taylor of Milford, Iowa.

The bride is a graduate of Alden-Conger High School and the University of Minnesota. She is employed at Water Street Solutions in Peoria, Ill., as a market adviser.

The groom is a graduate of Spencer High School in Spencer, Iowa, and the University of Nebraska. He is employed at Water Street Solutions in Peoria as a legacy adviser.

A reception was held at Willett’s Winery in Manito, Ill., followed the ceremony. After a Mediterranean cruise in May, the couple will reside in Peoria.